Is weed legal in California? Thanks to the law changes in November 2016, adults of 21 years and older may consume and grow cannabis. The alterations in California marijuana laws affect medical and recreational users. 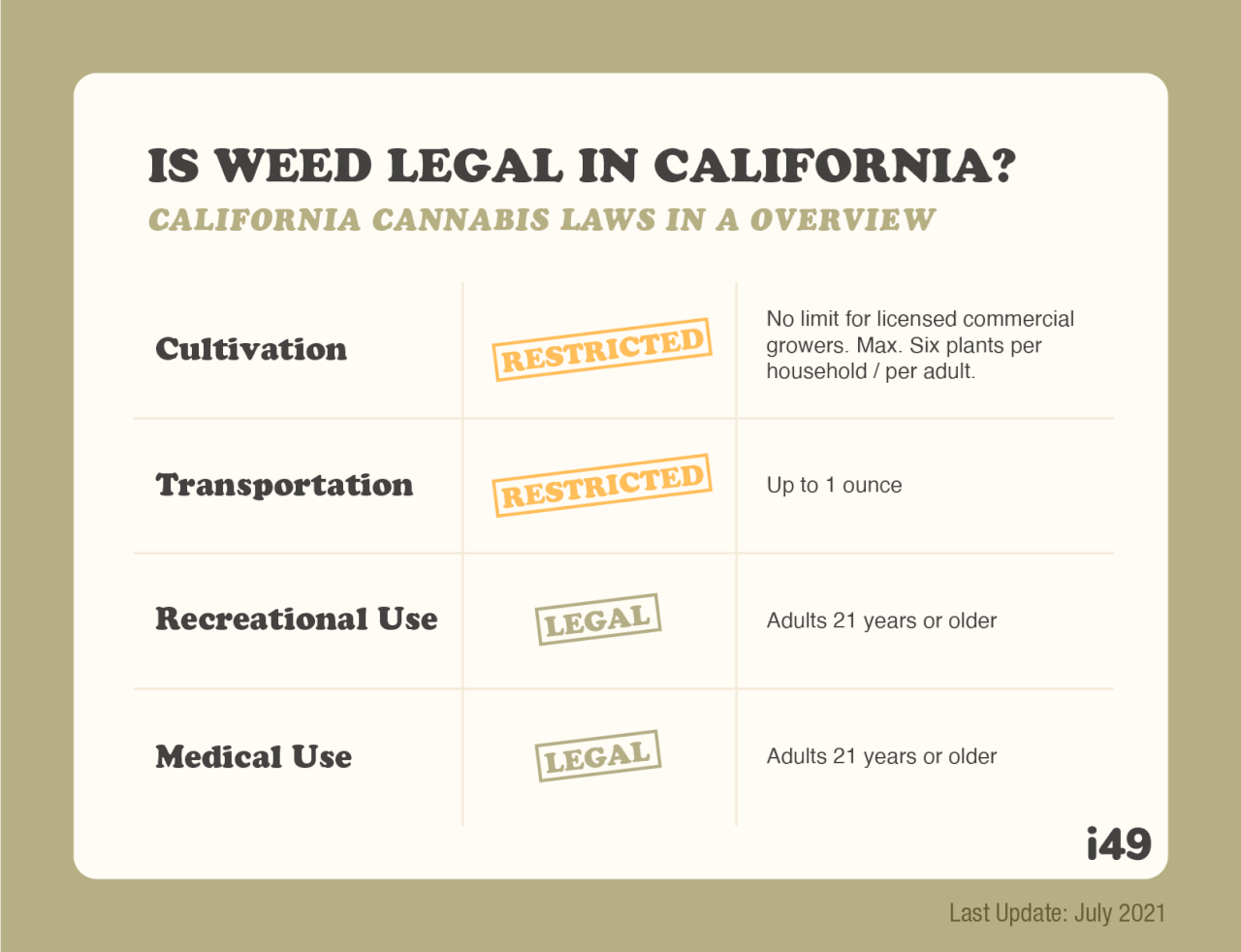 It took years of activism to make weed legal in California. Finally, after decades of political struggle, you’re allowed to cultivate up to 6 marijuana plants at a time for recreational use. Some may frown at that, but that’s up to 4800 oz (300lbs/136kgs) worth of smokable ganja per crop!

In January 2018, adults began buying weed for recreational use from legal marijuana dispensaries in California. For many people, it was a welcome change from the once-strict laws that were in place. The new cannabis regulations allowed individuals to buy, grow, and sell their buds legally.

Since the legal age to smoke weed in California is 21, you can buy weed seeds and start a cannabis garden. In 1996, after they made medical marijuana legal in California, people suffering from debilitating conditions could purchase medical cannabis.

The best part of the law introduced in 2016 is that marijuana is legal in California for recreational users. Adults 21 or older can buy up to 1 oz (28.5 g) of weed and 0.2 oz (8g) concentrate. You’ll still need a valid government ID, though.

Gone are the days where only medical patients have access to legal marijuana. As a recreational user, you can now order cannabis seeds from online retailers. Some of the best strains around let you grow and harvest “California-legal weed” yourself within weeks.

Thanks to the legalization of weed, you can buy feminized seeds without worrying about breaking the law.

Is buying cannabis legal in California?

The adjusted California marijuana laws in 2021 include carcinogen warnings on cannabis products. While you’re still allowed to buy weed in California legally, sellers need to label their products. If they fail to do so, they can face severe fines.

Although it’s legal to buy cannabis, the dispensary requires a permit. They’re also required to pay taxes and follow quality guidelines. If you sell marijuana without a license, you’re breaking the law.

Can I grow my own cannabis in California?

By now, everyone knows cannabis is legal in California, but many people are still unsure about growing weed at home. If you cultivate for personal consumption, you can have up to six marijuana plants. Your cannabis crops must be outside public view, and your harvest locked away.

While an outside weed plant might seem like a great idea, there could be consequences. After all, you don’t want your i49 Genetics seeds to flower only for a neighbor’s child to notice them. So before you plant your Shishkaberry Feminized seeds, find the right spot or get an indoor setup.

You might wonder if it’s worth cultivating marijuana for yourself. Well, the weather on the west coast makes California a fantastic spot for high THC seeds. Summer brings a lot of sunlight and fresh breezes, and winter rarely reaches freezing temperatures.

As a medical marijuana user, high CBD seeds may be more your vibe. You could visit your nearest dispensary, or you could start a weed garden. Since California marijuana laws changed, you may grow your CBD Blueberry feminized seeds in the comfort of your home.

As mentioned before, your cannabis plants must be locked up, away from the public. You’ll also need to keep anything more than 1oz (28.5g) inside your home.

Is cannabis consumption legal in California?

Decriminalizing marijuana use allowed Californians to light up without fear of breaking the rules. Although it’s legal to consume weed products, there are limitations. Here’s a list of those restrictions:

When did marijuana become legal in California?

In 1972, California initiated the nation’s first ballot box to legalize weed for recreational users. Although it failed, the Compassionate Use Act of 1996 legalized medical marijuana. Recreational use would later become legal in 2016 with the introduction of Proposition 64.

Many communities don’t have registered stores, forcing residents to drive far distances or buy their ganja from unknown sources. To reduce the risk to consumers, state legislators introduced a bill to encourage local jurisdictions to allow some retail stores to open.

Conditions that qualify for a medical marijuana card

California marijuana laws are very welcoming to visitors with chronic conditions. Anyone with a recognized medical condition may register for medical marijuana.  Regardless of who you are, local or foreign, if your registration is confirmed, you receive all the cardholders’ benefits.

The qualifying conditions for registration include:

If you’re from a different state, the medical marijuana you buy is taxed the same as recreational users.

Driving while under the influence of marijuana

Although recreational weed is legal, driving under the influence of marijuana is illegal. The penalties for cannabis DUIs range from probation, fines, license suspensions, or a prison sentence. Like alcohol DUIs, each conviction increases the consequences.

While it might seem like a fun idea to get high and drive around, the risks aren’t worth it. Always be responsible and follow the laws when consuming cannabis.

From day one of making weed legal in California, delivery of the best autoflower seeds in the USA became possible. Customers can choose top strains for safe, discreet, and most importantly, legal shipping right to their house. Thanks to marijuana legalization in 2016, individuals could start enjoying the feeling of harvesting and smoking weed they nurtured themselves.