Lawmakers are unlikely to succeed in making weed legal in Florida during the upcoming legislative session. They’re preparing various bills to broaden medical marijuana access, and several politicians proposed longshot measures to decriminalize lighting up for fun to people over the age of 21. 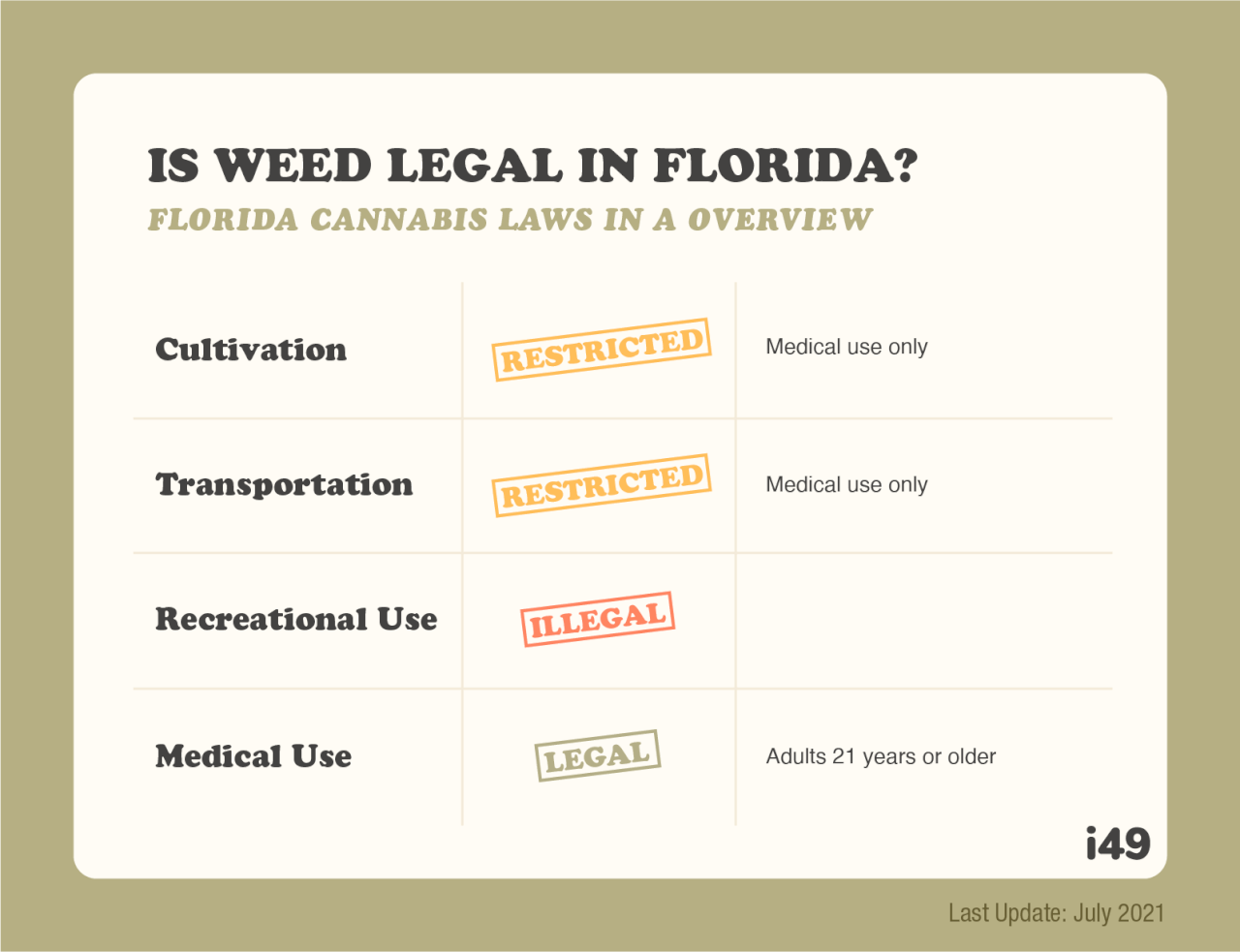 The bills introduced to the legislature for consideration falls under three categories:

Will weed be legal in Florida in 2021? Read on to understand better the current marijuana laws in Florida and an update on the latest developments.

While medicinal cannabis is legal in Florida to a limited capacity, recreational use is still strictly prohibited. Most Floridians and several lawmakers are pushing to decriminalize pot. You may want to start brushing up on your growing knowledge and make a list of the i49 genetics you wish to raise in your garden, as it would seem legalization is imminent.

Is medical marijuana legal in Florida? Yes, the use of medicinal weed is permitted, but to a limited capacity. Under the current legislation, buying high THC seeds from a marijuana seed bank to grow your own cannabis is illegal.

Both patients and caregivers are allowed to purchase, hold, and use weed for medicinal purposes, but only if that individual possesses a valid medical marijuana card. You’ll get labeled as a recreational user without this card, which is still illegal in Florida.

Medical marijuana registry caregivers and cardholders must buy their weed from licensed dispensaries, which you can find across Florida in all major metro areas. Apart from storefront sales, these “shops” also typically offer curbside pickup and delivery.

Is recreational marijuana use legal in Florida? According to state law, the use and sale of weed for amusement or fun is a criminal offense. Perpetrators that get caught with less than ¾ oz will face misdemeanor charges, punishable by up to $1,000 fine and 12 months imprisonment.

If you get caught with more than ¾ oz, you’ll face felony charges, which can land you in prison for as much as five years and up to a $5,000 fine. Considering the legal implications, you may want to wait for the law to change before buying pot seeds for your garden.

Is buying cannabis legal in Florida?

Under current Florida laws on marijuana, the purchase of medicinal cannabis is legal, but only through licensed dispensaries, while buying recreational weed is strictly prohibited.

Patients must buy their weed from a Medical Marijuana Treatment Center (MMTC.) Caregivers and patients that present their registry identification cards may buy smokable pot for 35 days (not exceeding 2.5 ounces) and other cannabis products (edibles, oils, etc.) for 70 days.

Most licensed MMTCs offer delivery services to registered patients residing in Florida, but fees may apply depending on the dispensary.

Can I grow my own cannabis in Florida?

Starting your own weed garden is an attractive option. If you reside in Florida, though, you may want to reconsider buying weed seeds for the time being.

According to current marijuana laws in Florida, growing or manufacturing cannabis for any purpose within state borders is illegal. The cultivation of weed is governed by Florida Statutes Section 893.13(1)(a). According to this legislation, it’s unlawful for anyone to produce any controlled substance, including Mary Jane.

Perpetrators will face third-degree felony charges if caught, and they may end up spending up to 5 years in jail and be held liable for a $5,000 fine.

Under Florida Statutes Section 893.1351, offenders caught in possession of a grow house with more than 25 cannabis plants will be brought up on second-degree felony charges. If they’re found guilty, they can face as much as 15 years in jail. Should minors be residing or found at this location, the state may bump up the charge to a first-degree felony.

Is cannabis consumption legal in Florida?

While recreational use is entirely illegal, consuming medical marijuana is permitted, but strict limitations apply.

The consumption of cannabis in any form is strictly prohibited:

You should also note that getting caught operating a vehicle under the influence of weed is illegal. In essence, medical cannabis users must consume their marijuana in or at a private residence.

Weed consumption is allowed in the form of pills, smoking, vaping, oils, spray, and edibles.

The law prohibits patients under 18 from smoking weed unless the individual gets diagnosed with a terminal illness. A second physician must also verify this diagnosis.

When will marijuana be legal in Florida?

When will recreational weed be legal in Florida? It’s impossible to foresee the future, but both Floridians and politicians throughout the state are pushing for the legalization of cannabis.

Lawmakers recently introduced a bill that would, if passed, make recreational marijuana legal in Florida for residents over the age of 21. It will allow any adult to buy up to 2.5 oz of cannabis at a time without the need to present an MMIC.

The state will still prohibit smoking weed in public, but it will amend Florida marijuana laws to allow home cultivation. The bill would also grant people previously convicted of cannabis possession to appeal their case for resentencing.

Should the bill fail to pass in 2021, lawmakers intend to add the proposal to the next election ballot. It may be tricky, as Florida requires ballot measures to be single topics, and various other states struck down marijuana legalization due to it covering multiple issues.

Floridians may want to start familiarizing themselves with the ins and outs of cannabis cultivation and how to grow feminized seeds, as it appears that marijuana legalization in the state will happen sooner rather than later.

Qualifying conditions for the use of medicinal weed in Florida

According to current state law, legal cannabis gets defined as either low-THC or medicinal weed. It means that all products, including the buds, resin, oils, and seeds derived from the marijuana plant, must contain 10% or more CBD and less than 0.8% THC.

Anyone that wishes to apply for a medical marijuana or registry identification card (MMIC)must:

When diagnosed with one of these ailments, as discussed below, your doctor will assist you in obtaining your medical marijuana card. Possession of an MMIC will place you on the compassionate use registry, which records all cannabis users in Florida. It also allows you to buy weed from a licensed dispensary for medicinal use.

Under Florida medical marijuana laws, to qualify to receive medicinal cannabis or a weed delivery system, the patient must be diagnosed by a physician with one of the following conditions.

Various lawmakers are tirelessly working toward decriminalizing cannabis use, possession, cultivation, and retail across the state. If the currently proposed bill fails to pass, legislators intend to add this much-disputed topic to the next election ballot.

With most Floridians in favor of legalizing weed, it’s merely a matter of time before the law changes. For now, Florida residents can only indulge themselves in reading up on cannabis cultivation and their favorite autoflower seeds.

Hopefully, Florida marijuana laws in 2021 may change for the better. Whether we get Florida legal marijuana in 2021 or even 2022, we are hoping for change soon.

Across the USA, at the time of writing, marijuana is fully legalized in 15 states and 1 district, with 1 more crossing the line on 1 July 2021. We’ll keep you updated as more regions come onboard.

While you wait, why not check out the other states where weed is legal?

Is weed legal in Massachusetts?

August 20, 2021 | Legalities of Growing
Massachusetts is located in New England, and is filled with historical sites and monuments. When the first colonists settled in the Pilgrim...
Read more

June 18, 2021 | Legalities of Growing
Arkansas is located in the southeast part of the United States. It’s the only state in the country that actively mines diamonds. Howev...
Read more

Is Weed Legal in Pennsylvania now?