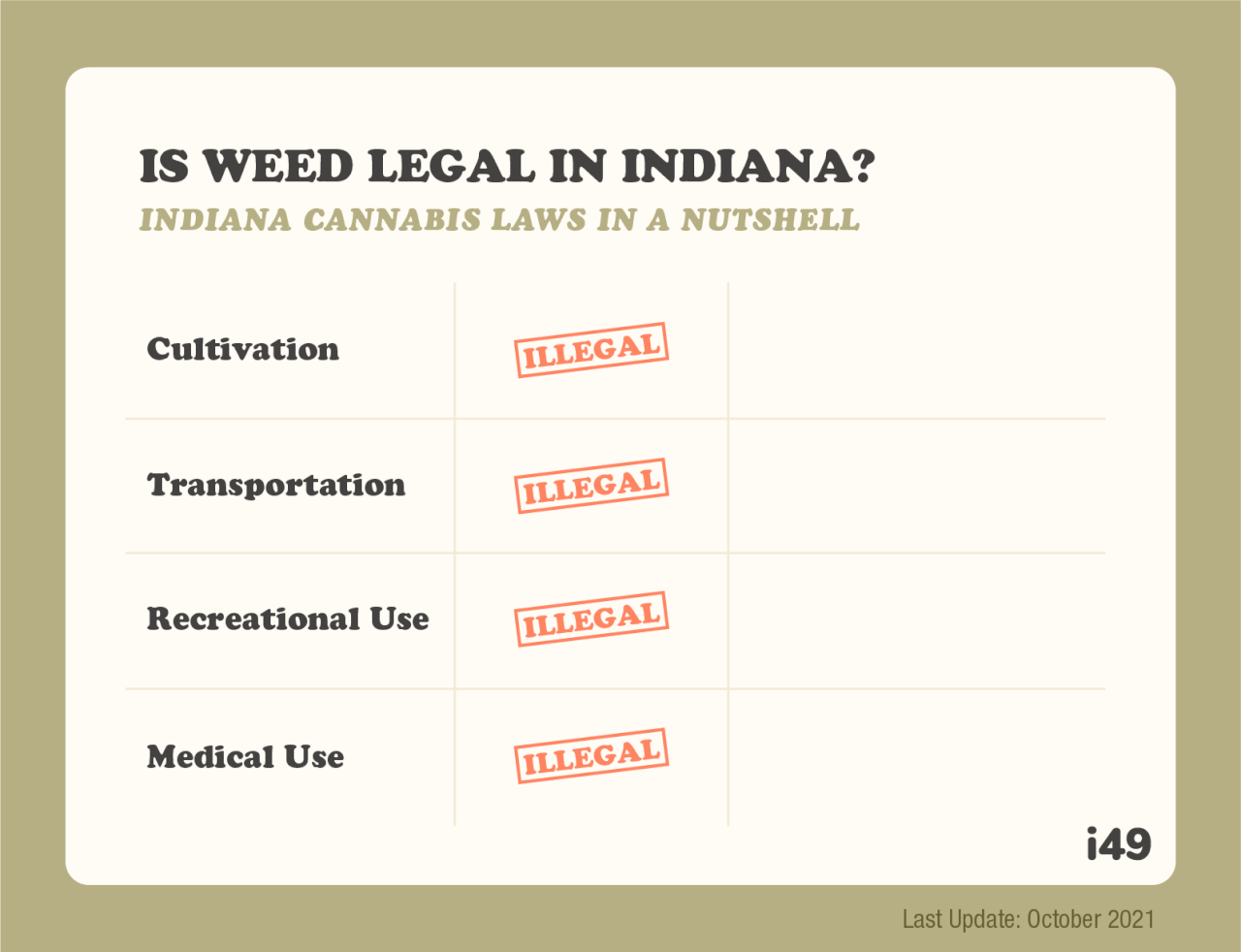 In Indiana, weed legalization remains a controversial issue. While various states are cashing in on the green, the Hoosier State has stayed behind.

Right now, Indiana’s marijuana laws only permit the sale, manufacture, and use of low-THC CBD products. Still, the Crossroads of America is fast approaching its own juncture.

Numerous bills could change everything from weed possession and purchase to cultivation and consumption.

Read on to learn what IN law currently says about cannabis use, whether Indiana will legalize weed, and if so, then when.

Indiana’s marijuana laws are some of the most restrictive in the country. They don’t provide for medical cannabis use and impose severely harsh penalties. Possession of any amount of weed is a Class B misdemeanor with a fine of up to $1,000 and 180 days jail time.

The marijuana laws in Indiana impose maximum penalties of a year’s imprisonment and a $5,000 fine for the following misdemeanors:

While the legalization of weed in Indiana is an ongoing issue, the following are still classified as felonies:

The marijuana laws in Indiana impose a maximum fine of $10,000 and six months to two and a half years of jail time for the above. You could get up to six year’s imprisonment for larger amounts.

First-time offenders can get a conditional discharge in some cases, while prior drug offenses could result in more severe penalties.

Is buying cannabis legal in Indiana?

Indiana’s weed legalization is currently limited to hemp extracts with less than 0.3% THC. You can only lawfully purchase CBD oil or other low-THC hemp-derived products from licensed retailers.

While you won’t find any cannabis seeds for sale in Indiana, you can still legally buy, collect, and own them. Ungerminated, they’re classified as adult novelty products throughout the United States. You can keep them as long as you’re over age 21.

Can I grow my own cannabis in Indiana?

No, the marijuana laws in Indiana don’t allow you to grow your own cannabis for any purpose, even though you can buy and own souvenir weed seeds. Unlicensed hemp is also illegal.

After the 2018 Farm Bill was enacted, Indiana’s marijuana laws shifted when Act 516 was passed. It only permits license-holders, who must abide by other strict regulations, to grow and handle low-THC hemp.

Is cannabis consumption legal in Indiana?

No, cannabis consumption of any kind is completely illegal according to Indiana’s marijuana laws. Only hemp-derived CBD products with less than 0.3% THC are permitted in the Hoosier State.

Is medical weed legal in Indiana?

No, medical weed is not legal in Indiana at all, even though you can collect ungerminated, adult-novelty, high-CBD seeds.

In 2015, attempts to change Indiana’s medical marijuana laws were unsuccessful. In 2017, CBD oil with less than 0.3% THC to treat severe seizures was permitted.

A year later, weed legalization in Indiana took a small step forward when low-THC hemp-derived CBD products were made lawful. There are still strict selling, testing, labeling, and packaging requirements, though.

Is recreational weed legal in Indiana?

No, recreational marijuana is explicitly prohibited, and any type of unlicensed or smokable hemp is outlawed. In Indiana, legal weed is restricted to low-THC hemp extracts.

When will marijuana be legal in Indiana?

No one can say precisely when marijuana will be legal in Indiana.

In early 2021, weed legalization in Indiana looked promising, with a total of ten bills filed in the General Assembly. The most notable of them include:

By April, only Senate Bill 201 succeeded. It provides a defense under certain conditions to persons who operated a vehicle with marijuana or its metabolites in their blood.

So, when will weed be legal in Indiana for recreational and medical use?

The legalization of weed in Indiana can happen as early as 2022 when the new legislative session opens. Most bills have been referred to committees in the meantime.

Watch out for weed legalization

The cannabis industry is blossoming, and everyone is noticing. Even the federal government is seriously considering marijuana decriminalization with bills like the MORE Act recently reintroduced in the House.

With over 30 states permitting medical weed and more than 15 allowing recreational cannabis, states where weed is legal are increasing, so it’s only a matter of time before marijuana is legal in Indiana. Stay ahead of the pack and start your own collection of feminized, autoflowering, indica, or sativa seeds.