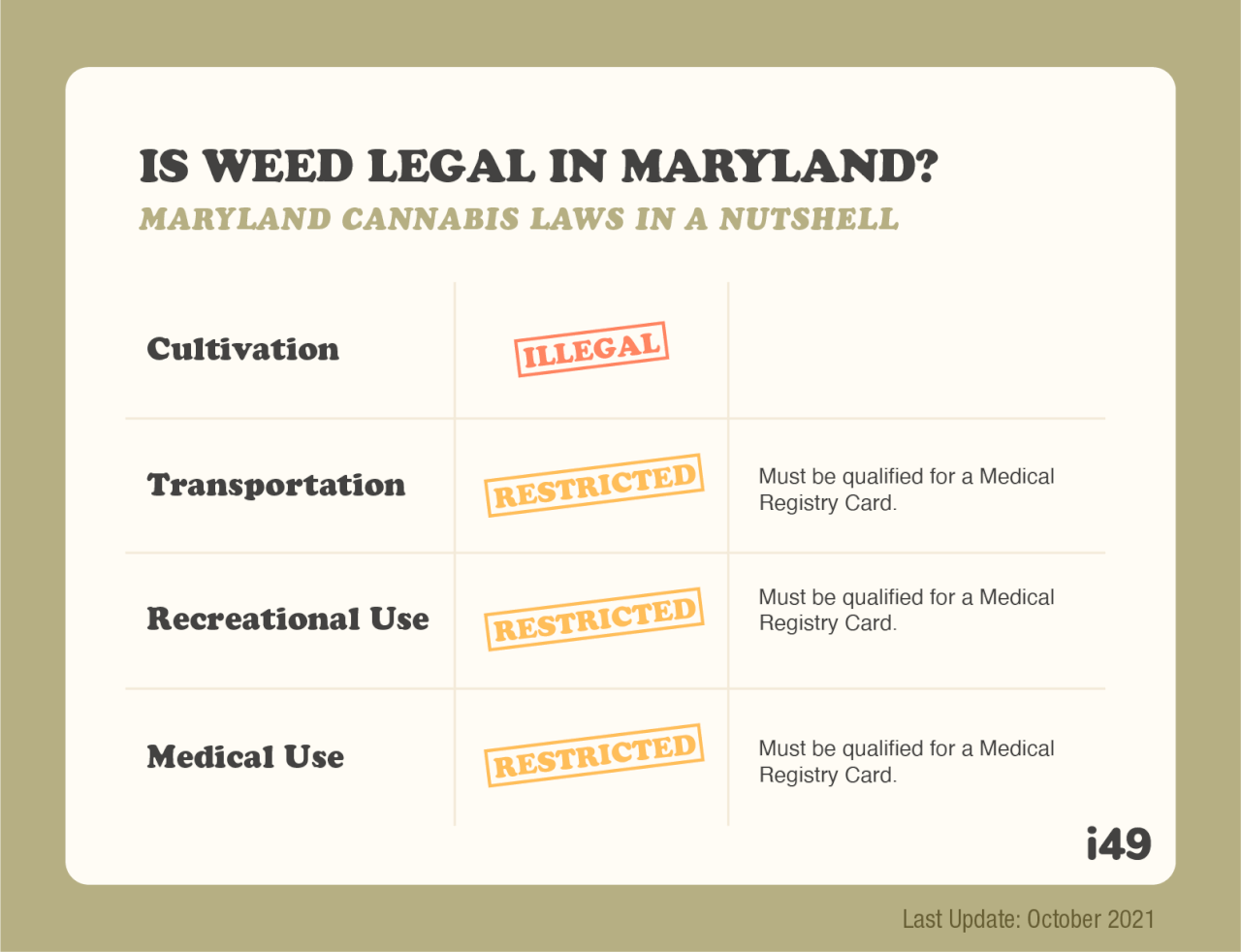 Following recent developments regarding marijuana legalization in the USA, most Old Line staters must be wondering: “Is weed legal in Maryland?.” Unfortunately, the kind people of this friendly region have to wait a little while longer before they can legitimately light up a late afternoon reefer.

For now, Marylanders can only indulge in the legal practice of education by studying the characteristics of indica and sativa seeds, preparing themselves for when marijuana is legal in Little America.

Read on as we discuss the legalities surrounding MD marijuana laws.

Is weed legal in Maryland? In the USA, this fundamental question often has no easy answer.

While recreational weed use is strictly forbidden under Maryland marijuana laws, the state legalized medicinal cannabis, albeit with strict limitations.

This revision subsequently led to establishing the Maryland Medical Cannabis Commission (MMCC.) This institute was assigned to:

In 2019, the MMCC released a list of regulatory changes. This modification resulted in a few administrative adjustments and added certified nurse midwives, nurse practitioners, dentists, and podiatrists to the existing list of medicinal weed providers.

Is buying cannabis legal in Maryland?

While Maryland weed laws allow the sale of medical marijuana, buying or selling recreational cannabis is a criminal offense with severe penalties.

Under Maryland marijuana laws for 2021, if you’re caught selling pot, you’ll face felony charges, punishable by as much as five years in jail and up to a $15,000 fine. Offenders caught with more than 50 pounds of weed could face a minimum sentence of 40 years in prison.

The marijuana law in Maryland does, however, make provision for medical cannabis retail. Caregivers and patients may only buy medicinal weed from state-licensed dispensaries, and the MMCC limits them to buying 4 ounces of usable pot every 30 days.

Although Maryland dispensaries are prohibited from selling edibles, they’re allowed to deliver medical weed to a patient’s home.

If you’re still pondering, “Is weed legal in Maryland?” In short, the answer is yes, but only for registered medical marijuana patients and caregivers.

Can I grow my own cannabis in Maryland?

According to Maryland laws on weed, growing your own cannabis, even if it’s for medicinal purposes, is a criminal offense. The only entities allowed to deal in weed legally are state-licensed dispensaries and cultivators. If you get caught harvesting pot illegally, you’ll be brought up on felony charges.

Maryland marijuana law doesn’t take into consideration the amount of weed you’re cultivating. If caught, the charge laid against you will be manufacturing or possession of an illegal substance with the intent to sell or distribute.

Until the lawmakers finally get around to changing Maryland cannabis laws, the only pleasure stoners in this fair state will legally get is the satisfaction of reading up on their favorite feminized seeds.

Is cannabis consumption legal in Maryland?

Still wondering, “Is weed legal in Maryland?” The restricted use of medicinal marijuana is legal throughout the state, but recreational consumption is strictly prohibited.

While patients are allowed to vape or smoke their meds in private, cannabis edibles are taboo. Patients under the influence of marijuana are also not protected by the Maryland weed law if they perform tasks that may constitute negligence.

As for cannabis possession, under the medical marijuana laws in Maryland, only registered patients and caregivers are allowed to lawfully carry up to an ounce of THC-infused products or four ounces of dried herb on their person.

According to marijuana laws in Maryland, anyone caught with 0.35 ounces of illegal weed or less has committed a civil offense, which is punishable by a $100 fine. Should you be apprehended more than once, you’ll be liable to pay a much larger fine.

Get caught a fourth time, and you’ll face misdemeanor charges that may buy you twelve months in county lock-up and a $1,000 fine.

To put it bluntly, “Recreational weed is not legal in Maryland.”

When will marijuana be legal in Maryland?

It’s safe to assume that the question currently brooding in every Maryland stoner’s mind is: “When will weed be legal in MD?” Unfortunately, there’s no telling when the state will decriminalize marijuana.

The ballot for recreational weed legalization got held back earlier this year due to licensing and distribution concerns. Pro-cannabis lawmakers are currently working toward sorting out these issues, but there’s no estimate of how long it’ll take. We can only hope that the challenges will be smoothed out and ready for the next legislative session.

In the meantime, Little Americans are free to stock up on their favorite sativa and indica seeds, as long as they don’t try to cultivate them before the Maryland weed law changes.

Under the medical marijuana laws in Maryland, for a patient to qualify for medicinal cannabis registration, a state-certified physician has to diagnose them with one of the following conditions:

According to recent research, marijuana legalization does have a positive outcome. Statistics in the states that have fully legalized cannabis show a diminished rate of trafficking and violence related to the illegal drug trade, reducing the wealth and power of drug gangs and cartels. In addition, it also proved to be a valuable source for raising tax revenue.

For Maryland, though, crime is still up, and an immense sum in tax revenue is lost.

Is weed legal in Maryland? More importantly, will this state’s stoners be able to partake in bong-day come 20 April 2022? Although no one can say for sure, with pro-cannabis lawmakers hard at work to amend the law, this possibility isn’t so far-fetched.

While waiting, Marylanders should start stockpiling regular, feminized, and autoflower seeds to get a head start when legislators finally make the right call.

There’s also no crime against education. If you’re interested in weed cultivation, log on to i49 Genetics and familiarize yourself with the particulars of growing this magical herb.