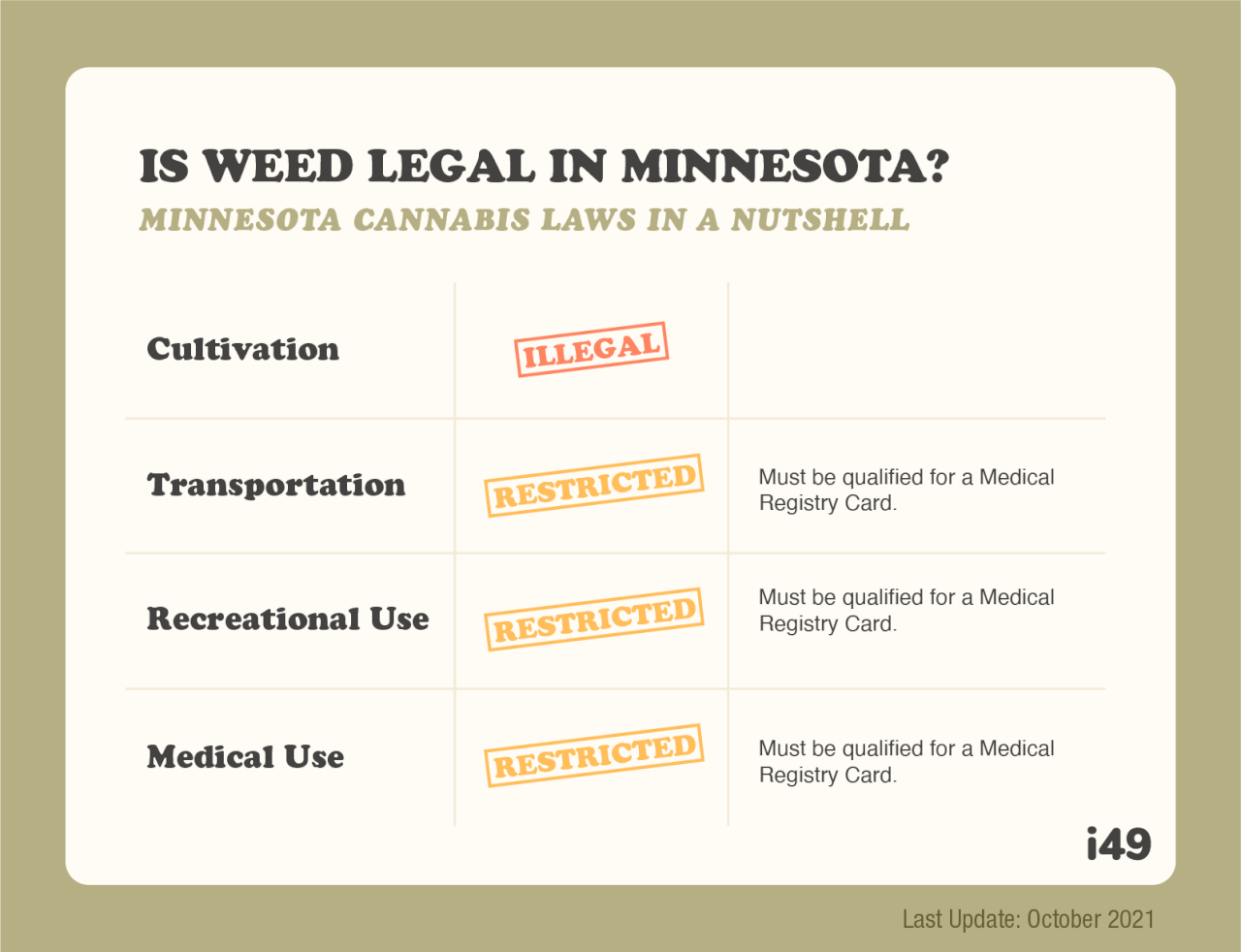 If you’re someone who gets high from exploring the outdoors like hiking, fishing, and biking, then Minnesota is the place to be. You may also enjoy the occasional bit of cannabis and are interested in knowing the latest news on marijuana, like Is weed legal in Minnesota?

The only legal weed in Minnesota is for medicinal purposes. So, if you’re considering visiting this North Star State, it’s advisable not to bring your pot along. This might come as sad news if you’ve been planning a trip, but remember that marijuana is illegal under federal law, and transporting it across any state line is deemed a felony.

Let’s have a closer look at the marijuana laws in Minnesota, what the prospects are for resident weed users, and if buying pot seeds is an option.

As mentioned, weed isn’t legal in Minnesota, except for medicinal use. The Minnesota House has already voted to legalize marijuana for adult use, but unfortunately, it wasn’t successful at the Senate level.

The cannabis bill will allow adults older than 21 to possess a maximum of two ounces in public and a maximum of ten pounds in their homes. A Cannabis Management Board will be established to manage the regulation and preside over the medical cannabis program.

According to the Minnesota marijuana laws for 2020, possession of 42.5 grams and less of weed is regarded as a misdemeanor, and the only penalty is a $200 fine. If this is your first offense, then you qualify for a conditional release and to have this violation removed from your record.

The Minnesota pot laws regard possession of weed above 42.5 grams as a felony. These transgressions have much harsher sentences. They range from five years to 30 years in prison, together with a fine of $10,000 up to $1,000,000.

Is buying cannabis legal in Minnesota?

Buying weed is legally possible in this state, so long as you’re using it for medicinal purposes. The Minnesota marijuana laws prohibit the sale of pot for recreational use.

The regulations about the sale of cannabis are similar to the possession laws. Any sale of weed that’s 42.5 grams or less is considered a misdemeanor and doesn’t carry any jail time, only a fine of $200.

Anything exceeding the 42.5 grams limit is considered a felony, and offenders face much stiffer penalties. A summary of the sale and possession of marijuana is also found in the 2020 Minnesota Statutes.

It’s possible to buy cannabis seeds online if you choose to keep them as a souvenir, or perhaps you might be interested in growing your crop when Minnesota pot laws change.

Can I grow my own cannabis in Minnesota?

The Minnesota marijuana laws aren’t very clear on what’s allowed when it comes to growing weed. This Gopher State is known to be one of the top agricultural farming regions of the US, but growing marijuana isn’t at the top of their list.

If you’re caught cultivating any ganja, the authorities will apply the possession law and the subsequent penalties. Patients using medical marijuana are prohibited from growing weed.

Please remember to keep the Minnesota weed laws in mind if you consider yourself brave and venture into pot farming. Once the day comes when you can legally raise your own crop, consider planting autoflower seeds that flower in a very short period.

A cannabis seed suitable to the Minnesota climate is Auto AK47 Fem. It has medicinal properties that’ll aid those with anxiety and stress.

Is cannabis consumption legal in Minnesota?

Medicinal marijuana in Minnesota is the only cannabis consumption that remains legal until the legalization of weed is voted in at the Senate level. Minnesotans are looking forward to the day they, too, like their neighbors in South Dakota, can have marijuana legal in Minnesota.

On 1 July 2021, cannabis will be legal for recreational and medicinal use in South Dakota, and they’ll be the first state to legalize both in the same year.

In the meantime, the residents of Gopher state can browse online at a marijuana seed bank and decide on which cannabis seeds to buy and store for the big day.

Is medical marijuana legal in Minnesota?

In Minnesota, medical marijuana is legal but only in certain forms. The law allows two manufacturers in the state, and each one is permitted to open four dispensaries.

In Minnesota, medical marijuana is available in tablets, capsules, pills, lozenges, liquid, and other forms, as updated on the Department of Health’s website.

Patients need to register with the Office of Medical Cannabis and wait approximately 30 days for approval. They should also pay a $200 registration fee before becoming eligible for purchasing the weed they need.

When will marijuana be legal in Minnesota?

Even though medical marijuana is legal in Minnesota, legal weed for adult recreational use still eludes this state. Although the bill didn’t make it to the Senate in the 2021 legislative session, lawmakers have allowed the medical cannabis program to be adjusted to permit patients to smoke weed as well.

The bill’s sponsor will have to try again in 2022 and hope for a better outcome. When weed becomes legal in Minnesota, they too can say that “struggle is the enemy, but weed is the remedy.”

Good things come to those who wait

The North Star State might not know for sure if 2022 is when marijuana becomes legal in Minnesota, but while they’re waiting, they can draw strength from those who’ve gone before them.

The state of Colorado, where weed is legal, had to wait a long while too. Even after the legalization of pot, they waited two more years for it to become a reality.

Minnesotans can look at what they need to put in place to be ready when marijuana for adult use is finally voted in, and then they can proudly say that weed is legal in Minnesota. After all, good things come to those who wait!