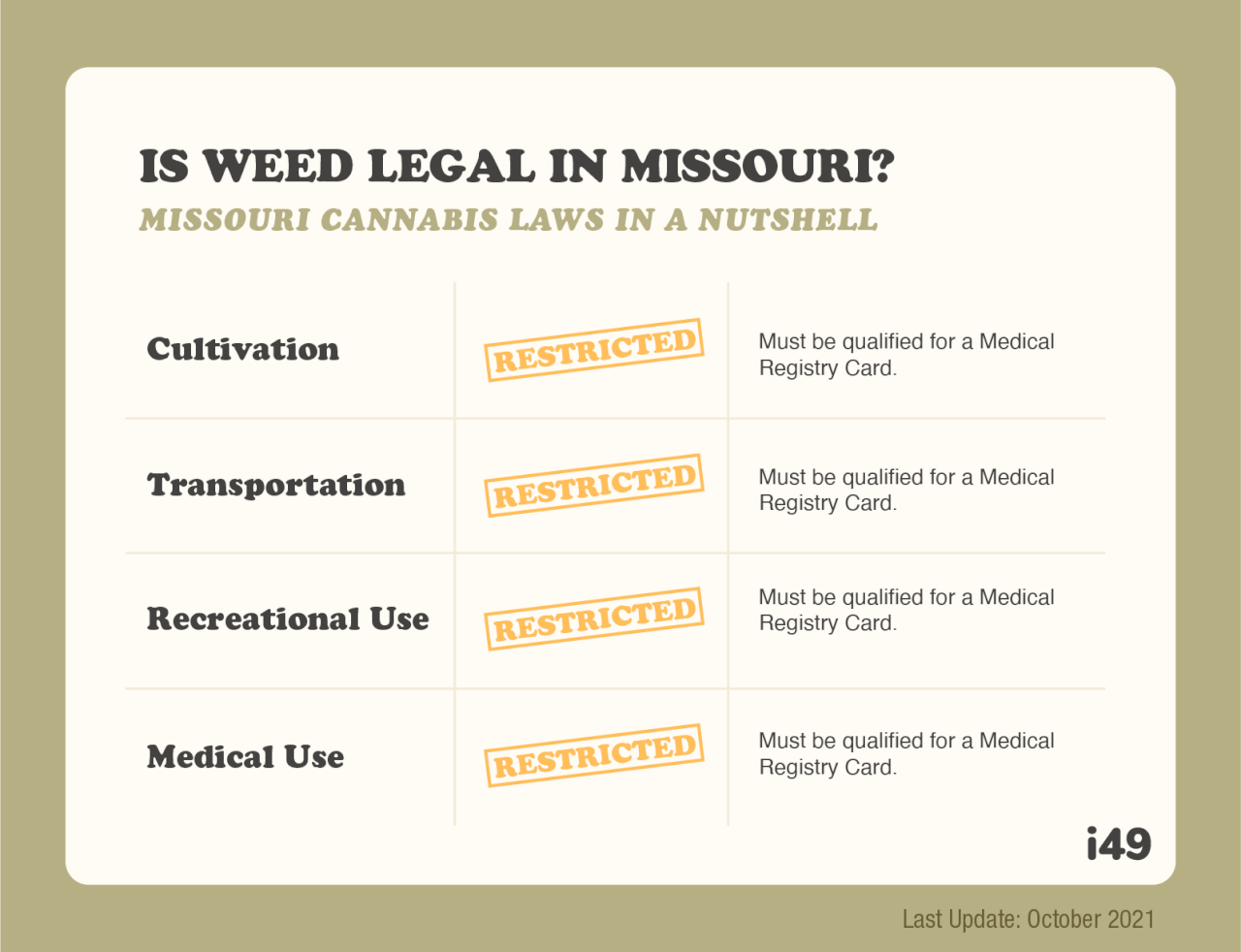 Is weed legal in Missouri? Not for personal use, but that’s a very short version of the response.

Centered on the North-South border, this state represents a mixture of rural and urban, traditional and progressive. Missouri marijuana laws are among the many representations of these ideological circumstances.

The Show-Me state remains pretty conservative and distrustful of change. Still, its medical weed program and the widespread democratic pressure for cannabis reform make us at i49 Genetics hopeful of an eventual turn of events.

Let’s examine the current marijuana laws in Missouri and discuss what the future might hold.

The existing Missouri weed laws aren’t as permissive as we’d like to see. The punishments are strict even for a red state, but we’ve seen worse in its immediate neighbors.

At the moment, the weed regulations punish amounts below 1.23 ounces with a misdemeanor with a maximum fine of $2000. Everything above that amount historically counts as intent to distribute.

The Missouri medical marijuana laws are more permissive. The first bill regarding weed for healing passed in 2014 when the Missouri Hemp Extract Registration Program made CBD legal in Missouri.

The year 2018 brought additional advancements. There was a ballot incentive to legalize medical weed, which is now available in flower form to cardholders for a long list of severe health conditions.

Is buying cannabis legal in Missouri?

If you’re not a patient, every cannabis purchase brings about potential trouble with the law. Cardholders can acquire legal weed in Missouri from state-licensed dispensaries.

These shops sell dried marijuana and extracts, available after getting a prescription from a licensed physician. You’ll also have to register with the Department of Health and Senior Services, which is the authority that determines the list of conditions that allow patients to purchase and use marijuana as a form of treatment.

Note: Apart from the entries in the list, other debilitating psychiatric disorders and persistent ailments causing constant pain and muscle spasms count as potentially qualifying. The law also allows physicians to prescribe cannabis instead of addiction-inducing medication for chronic conditions.

Missouri cannabis laws include no clause on reciprocity. Only residents may purchase from state dispensaries.

When it comes to cannabis seeds, they’re legal for everybody in the state, as long as they stay ungerminated.

The DHSS doesn’t offer any resources or support for buying weed seeds to those allowed to grow, leaving it to the individual to find a dispensary with quality products.

Can I grow my own cannabis in Missouri?

Cultivation for personal use is a felony punishable by 3 to 15 years in jail and significant monetary fines. The weed laws in Missouri allow patients to grow their own, though, which represents a significant step in the right direction.

Medical marijuana users can pay an additional fee and own up to:

You’ll need a secure, enclosed facility and a statement that allows the authorities to inspect your garden.

Is cannabis consumption legal in Missouri?

MO marijuana laws enable purchases of up to four ounces of marijuana flower or a processed equivalent every 30 days. Independent physicians might approve the patient for more.

Consumption can happen only in private spaces under Missouri pot laws. Property owners may dedicate a consumption space and potentially limit the allowed forms to only non-smokable marijuana in cafes, malls, theaters, and similar locations.

When will marijuana be legal in Missouri?

As the medical marijuana laws in Missouri continue expanding under democratic support, the voices of activists are becoming louder and more accepted. The state legislature is considering a wide range of cannabis-specific bills related to regulation and taxation, too.

Missourians for a New Approach is an advocacy group spearheading the efforts towards legalization. The signature-gathering efforts halted in 2020 due to the pandemic, but efforts for 2022 are going strong.

There’s even more reason to be optimistic. This region saw an unprecedented event in 2021 when a Republican representative stood behind an initiative to make marijuana legal in Missouri.

The logic behind this push is that the law enforcement resources and the financial losses are too significant to continue with the current practices. The proposed amendment would:

The state would treat cannabis like alcohol and the legal changes as a business plan, with minimal restrictions on amounts, forms, and licenses.

This constitutional amendment wouldn’t legalize immediately. If it passes, the decision goes to the voters on the 2022 ballot, and it’s up to them to make weed legal in Missouri.

Between official legalization efforts and vocal advocates for reform, things are looking up for Missourian stoners.

Is weed legal in Missouri? Not yet, but that might change sooner than you think. Once it does, our marijuana seed bank is open to anybody looking to experience the best that the cannabis industry has to offer.

Developments in the legality of marijuana are constant in 2021, so much that it’s becoming a challenge to keep up. Check our resources on the states where weed is legal, stay up-to-date, and stay optimistic—your area might be next to join the party.