Is Weed Legal in New York?

Here we will answer the question; is weed legal in New York?

When you hear New York, you instantly think of the Big Apple.  The city that never sleeps could use some marijuana to relax and fight insomnia. As such, residents and prospective visitors may be on the lookout for legal marijuana in New York? 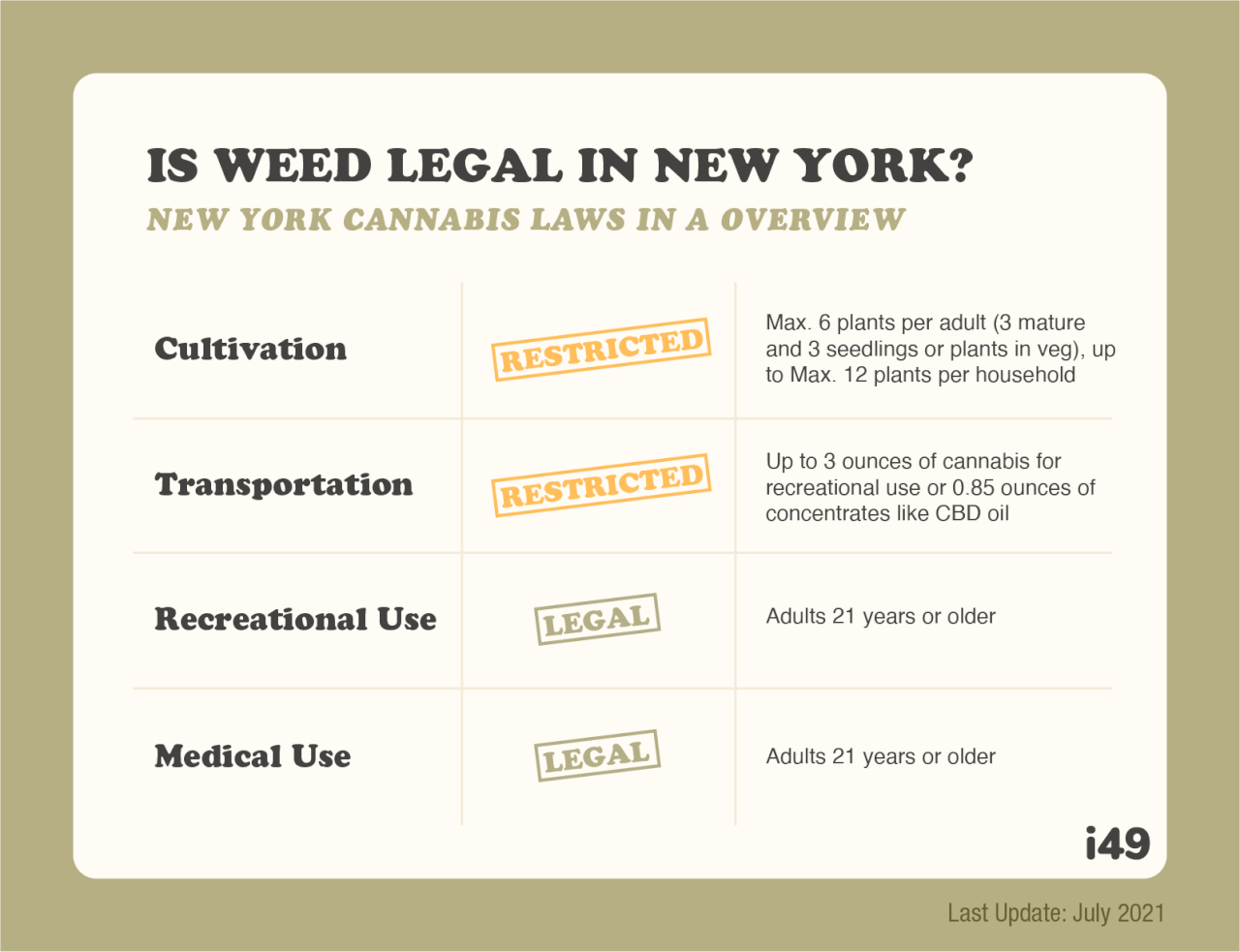 Although this rule immediately went into effect, New Yorkers still have some restrictions. You can now possess up to 3 ounces of New York weed legally or less than 24 grams of concentrates. Officials allow people to smoke marijuana legally in New York anywhere you can smoke a cigarette if you’re 21 years or older.

Is marijuana legal in New York City for outdoor tokers? Under the Clean Indoor Air Act, it’s illegal to smoke New York state-legal weed in bars, restaurants, offices, subways, schools, ferries, and other buildings. The New York marijuana law also bans smoking in parks, beaches, or pools. You can smoke within your home, but only if your landlord permits it.

Currently, you’re not legally permitted to buy New York legal marijuana without a prescription or sell it without holding a license. These rules will change once legislation creates definite rules on purchasing and distributing. Officials believe it could take 18 months to see recreational weed products in dispensaries, but we can’t make any promises.

If you’re caught with more than 3 ounces but less than 8, it’s a misdemeanor, and you’ll get up to one year in jail and a fine of up to $1,000. The penalties continue to increase based on how much marijuana you’re busted with.

With that being said, is medical marijuana legal in New York state?

If you’re wondering, is weed legal in New York for medical patients, as far as medical marijuana in New York goes, it’s been legal since 2014. To get a card, you must have a prescription from your doctor and be diagnosed with one of the following conditions:

Before the new New York state medical marijuana laws passed in March 2021, patients could have up to 30 days of non-smokable cannabis products. That has changed to permit medical marijuana users a 60 day supply, and it can be smokeable.

At the time of writing, buying cannabis is, strangely enough, legal but not allowed. The New York marijuana laws are passed, and purchasing marijuana will be permitted in licensed dispensaries and online sites like i49 Genetics soon enough.

While you may not fully be able to buy legal weed in New York, it is most certainly on the horizon.

Officials need to write specific rules about licensing, where products will be grown, and the taxes when sold. Technically, if you buy marijuana how you always bought it, AKA on the street with a handshake, it’s still illegal.

Senator Liz Kruger states that under marijuana laws in New York, there isn’t a real penalty for purchasing less than 3 ounces, but it’s still not allowed, and there could still be a fine for selling it without a license.

New York is in a transition phase, as the governor signed only a few months ago. Once time passes and the state has everything set up, buying up to 3 ounces of weed will be legal in New York for all residents or people within its borders.

Can I grow my own cannabis in New York?

The new New York marijuana law states that those 21 and older can grow up to 6 plants with cannabis seeds. Of those, only three can be in the mature state, and regardless of how many adults live together, the limit is 12 plants per household.

This doesn’t go into effect immediately, though. Medical cannabis patients will have to wait six months from when the marijuana laws in New York passed to cultivate. For recreational use, people have to wait until 18 months after the first dispensary opens.

Is it legal to smoke weed in New York? Yes, for both recreational and medicinal purposes, New York legal weed consumption is finally allowed. Hallelujah! You’re allowed to smoke wherever cigarette smoking is permitted. New Yorkers can eat edibles almost anywhere without penalties.

We suggest trying the Auto CBD Kush Fem seeds. It’s part of the high CBD seed collection with 14%, which helps keep you calm in the noisy, stressful city. It also contains 7% THC, so it’s balanced. The strain has a lemon flavor, which is pleasant on a sunny day and should not stink out your apartment too much.

It’s still illegal to drive under the influence, and a police officer has the right to pull you over if they’re suspicious.

When will marijuana be legal in New York?

Technically, possession and consumption of weed is legal in New York. People just have to be patient and allow officials to finalize the rules. We’ll probably see the first dispensaries opening, more people using marijuana products, and home growing taking off very soon.

Therefore it is possible to enjoy legal cannabis in New York providing you meet the criteria.

Welcome to the Big Smoke

If you asked us is weed legal in New York a few months ago, we would have said no. But now… Yes! Legalizing marijuana in March 2021 has completely revolutionized this market. The start will be slow, but in the next five years, cannabis will create jobs and spread peace throughout the Big Smoke.

Along with New York, some other northeastern states like New Jersey, Vermont, Maine, Massachusetts, and more throughout the country have legalized marijuana. Since New York marijuana law has changed, there’s been more chatter about legalizing weed in other areas, making the list of states where weed is legal swell up.

However, federal legalization could take a lot more time. Until then, only consume and possess marijuana products in states that allow it. If you’re a New Yorker, now you can start researching homegrown plants and even buy cannabis seeds.