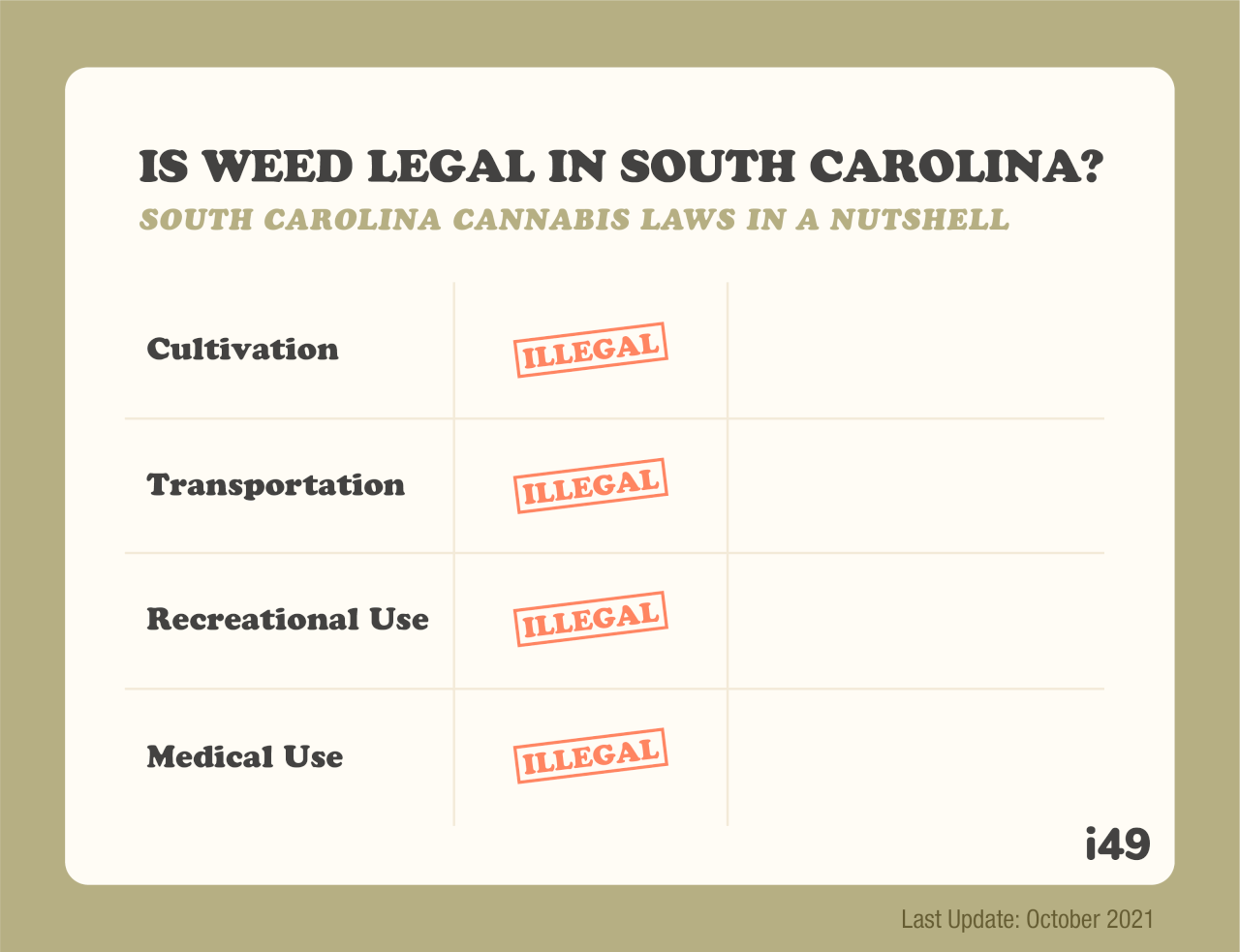 Medical marijuana supporters have been struggling for six years to have a bill passed to legalize cannabis for medicinal use. The residents of the Palmetto State are being urged to contact their lawmakers and encourage them to pass this legislation because enough is enough. It’s time to take action.

Some officials aren’t keen on having the medical marijuana bill passed as they see it only as an attempt to have South Carolina legalize weed.

Continue reading to learn more about the Palmetto State’s marijuana laws and see what the future holds for resident pot users.

Many states have legalized weed for both medical and recreational use, but marijuana isn’t legal in South Carolina.

Other parts of the country have prohibited the use completely. The laws regarding marijuana, therefore, vary from state to state.

The marijuana laws in South Carolina aren’t exactly crystal clear. They’re also much more inhibiting than those of other states.

Since possession, cultivation, and trafficking of marijuana aren’t legalized in South Carolina, it’s important to familiarize yourself with the law to avoid any violations.

Possession of less than one ounce of marijuana can result in 30 days in jail and a $100 to $200 fine. Anything over an ounce can be considered as intent to sell weed.

The South Carolina marijuana laws for 2020 also further indicate that the sale of weed is a felony and is punishable with up to five years in prison and up to a $5000 fine. The second and third offenses carry a longer sentence and a heftier fine.

Trafficking pot of 10 to 99 pounds can result in one to five years confinement with a maximum fine of $10,000. The consequences of any subsequent offenses are much harsher and could get you 25 to 30 years and a $200,000 fine.

Weed isn’t legal in South Carolina, and this includes buying it. If you happen to buy any pot while out of state, you’ll face criminal charges if found with it.

The marijuana laws in South Carolina define weed as all species of the marijuana plant, including weed seeds, the resin extracted, every compound, and derivatives.

Although CBD oil was legalized in 2014, there’s currently no dispensary selling any weed products. CBD products can, however, be bought at vape outlets, natural health shops, and head shops.

South Carolina cannabis law also doesn’t cater for any delivery services as it’s prohibited. If you attempt to buy marijuana seeds online, you could opt for discreet delivery, but it isn’t allowed.

Can I grow my own cannabis in South Carolina?

South Carolina weed laws only allow the cultivation of certain marijuana, hemp. The authorities in this state are quite stringent on the definition of hemp, as recorded in the Hemp Farming Act, and if you deviate from it and happen to grow anything else, you could be fined.

To grow hemp, you would need to apply with the South Carolina Department of Agriculture at the start of each year. You also need to be a state resident, pay a fee, and consent to a criminal background check.

If you’re caught growing less than 100 marijuana plants, you could serve up to five years in prison and pay a $5,000 fine. The South Carolina pot laws further stipulate that growing between 100 and 1000 plants can lead to 25 years in prison with a maximum fine of $25,000.

The more you grow, the greater the penalty. If you can buy cannabis seeds, then best keep them until weed is legal in South Carolina.

In South Carolina, medical marijuana is still a dream waiting to become a reality. While some have been working hard to have the bill legalized, others are just too afraid that if medical weed is legalized, then recreational will follow, and this cannot happen.

The marijuana laws in South Carolina do allow for an exemption for the possession of CBD. This is due to CBD treatment allowed in only a few medical cases.

The oil needs to contain 15% CBD and no more than 0.9% THC. If anyone is caught with a product that exceeds these limits, they’ll be charged with possession.

Patients need to be enrolled in an authorized clinical research program to gain access to this CBD oil and be protected from the South Carolina marijuana laws.

Doctors eligible to recommend cannabis need to be a medical practitioner or a doctor of osteopathic medicine with a state Board of Medical Examiners license. They need to be practicing in an academic medical center in South Carolina and be treating patients who have severe epilepsy.

To qualify for CBD, you need to be suffering from any form of severe epilepsy, such as Lennox-Gastaut Syndrome and Dravet Syndrome. Your condition should also be non-responsive to traditional medicines, and you need to be recommended by a qualifying physician.

It’s safe to say that the answer to the question, “Is medical weed legal in South Carolina” is a resounding NO. The supporters of the Compassionate Care Act are hopeful to get this bill passed in 2022, which could legalize medical marijuana.

According to the South Carolina marijuana laws, cannabis consumption for recreational purposes is highly illegal. Cannabis in the form of CBD oil is allowed to be consumed by eligible patients.

The marijuana laws in South Carolina are so stringent that even if you do not have any weed in your possession but have a device used to consume, administer, or manufacture pot, then you could be charged with the possession of drug paraphernalia.

The South Carolina pot laws further prohibit weed consumption even if you bought it legally in another state and successfully transported it to South Carolina.

When will marijuana be legal in South Carolina?

At this moment, there’s no indication as to when South Carolina will legalize weed. This state is still considered to be very conservative and more so when it comes to marijuana.

The Republicans have recommended the South Carolina Compassionate Care Act to give patients access to cannabis to treat certain medical conditions. So far, they’ve not been successful in having the bill passed as legislation.

They remain hopeful that it’ll be voted in with the next legislative session.

While you’re waiting for the day when weed will be legal in South Carolina, perhaps careful planning is in order. One way of doing this is to ensure you have the best cannabis seeds that suit your needs.

If you’re a patient in need of medicinal cannabis, perhaps high CBD seeds are worth considering, like CBD Black Diesel 1 to 1 Fem, once growing weed becomes legal in South Carolina.

If you look at a neighboring state like Georgia, where medical marijuana is legal, you could learn what to expect when this Palmetto State’s cannabis laws are amended.

In the state of Virginia, weed will be legal from 1 July 2021. Virginians must be ecstatic, and hopefully, more states will follow suit.