All the States where Weed is Legal

Nowadays, there is an ever-increasing amount of states where weed is legal, however, many states are still in limbo regarding the exact legislation that applies.

While there are several states where weed is legal to registered cardholders and others permit recreational use, the legislation surrounding cannabis use in the USA still has a long way to go.

A map of states where weed is legal 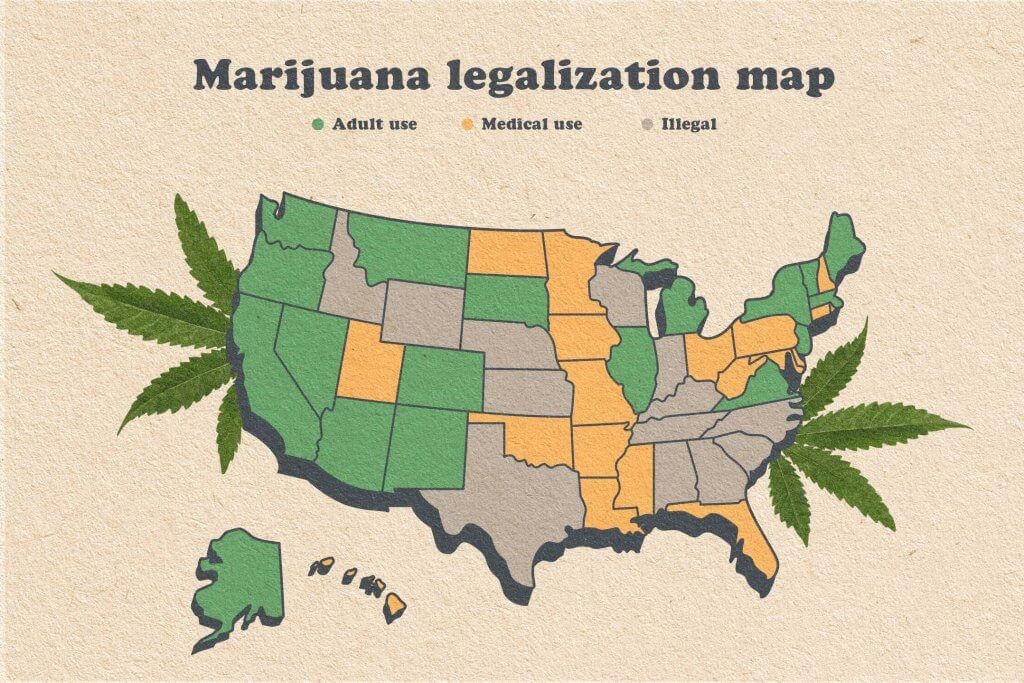 Legalization has been a hot topic for the last few years. Many state senators are proposing bills to legalize the sale, consumption, and cultivation of marijuana products.

These laws affect all marijuana users and growers in the USA, requiring that they be informed of their particular state’s presiding legislation.

Is marijuana legal in the USA?

While many consider decriminalization to be a positive step, many argue that federal laws need amendment in the USA. There are some marijuana legal states, but this won’t stop lobbyists pushing to have weed made legal across the USA.

An introduction to federal cannabis laws

Under the controlled substances act of 1970, the use or possession of marijuana is still deemed illegal under federal law in the continental US. However, in recent years there has been a rise in states with legal marijuana.

According to the CSA, medical marijuana is classed as a Schedule 1 substance, grouping it with numerous other substances considered highly addictive and yielding no medicinal value.

California has been at the forefront as one of the pioneering marijuana legal states.

As mentioned before, many states are in the process of adapting their marijuana laws to allow for medical and recreational use and cultivation.

Like Alabama, some semi-legal marijuana states may permit the use of cannabis for medical purposes; they may also consider recreational use and cultivation as a felony, punishable as a misdemeanor.

The different levels of weed legalization

When it comes to the reformation of the laws that govern drug policy, four different categories govern the use of cannabis in legal cannabis states and others.

States where weed is legal, decriminalized, or illegal

Below we have compiled a table depicting the current states where marijuana is legal for recreational, medical consumption, and cultivation in each US territory. Where possible, we also provide the regulations presiding over the transportation of cannabis as well.

You’ll notice that there was an increase in states where recreational weed is legal in 2020.

CBD cannabis oil is legal in all 50 states, providing it meets federal guidelines in terms of THC content.

So if you want to know how many states marijuana is legal in, this table is an indispensable resource. Make sure you check out our map of states where weed is legal at the top of the page too!

Now that you’ve looked at our list of states where marijuana is legal, you may have found a lot of new information regarding neighboring states. This is useful if you intend to travel there. While some states where weed is legal in 2021, one can see that the USA requires a standardization of the laws that apply to legitimize cannabis use.

Furthermore, you should also familiarize yourself with local regulations; even though cannabis use is legal in some states it may not be allowed on a college campus, for example.

While strides are being made towards having all states with legal cannabis, cannabis legal states are still far outnumbered by states that consider it illegal.