Nitrogen deficiency in cannabis can be a problem as you must feed your marijuana nitrogen.

If you didn’t know, nitrogen is one of three macronutrients that cannabis requires. Nitrogen constitutes the first letter of NPK (Nitrogen, Phosphorus, and Potassium). In this article, we will look at how to identify and treat a marijuana nitrogen deficiency.

Why is my weed plant turning yellow? While there could be several answers to this question, you should start with the most common causes and work your way down the list from there. Nitrogen is the most abundant element in the air we breathe, and it’s one of the most critical nutrients for a weed plant’s health.

Read on if you’ve noticed your weed leaves turning yellow lately and would like to diagnose, remedy, and prevent the recurrence of this common deficiency.

What does nitrogen do for cannabis plants?

Along with phosphorus and potassium, nitrogen is one of the three macronutrients that all cannabis plants need to survive. Without it, your plants cannot produce amino acids, making up the unique proteins weed plant cells need to grow. It’s essential to photosynthesis and is a vital nutrient for strong early plant development.

Typically indicated by weed leaves turning yellow, a shortage of nitrogen in marijuana will ultimately lead to severely stunted growth, a tiny crop, or in severe cases, even death of the cannabis plant. By the same account, an excess of nitrogen will lead to an abundance of unwanted biomass, like leaves and stems, but a weakened root system.

Nitrogen is a mobile nutrient – what does this mean?

Cannabis plants can transport certain nutrients throughout the crop, known as nutrient transportability. Understanding nutrient mobility is a skill to hone in helping you diagnose potential weed deficiencies.

As a rule of thumb in early cases, a cannabis plant lacking in a specific mobile nutrient will have the oldest, largest marijuana leaves yellowing. At the same time, new growth may seem to be flourishing as it’s moving the proper nutrients to these parts.

A shortage of immobile nutrients will lead to the entire weed plant looking unwell as it cannot transport them to new growth areas.

Nitrogen is responsible for the plant’s overall bulk during the vegetative period. A sure sign of deficiency is fan leaves turning yellow during veg. Weed with a nitrogen deficiency will consume less water as its vascular systems begin to break down, and your cannabis yield will suffer in the end. 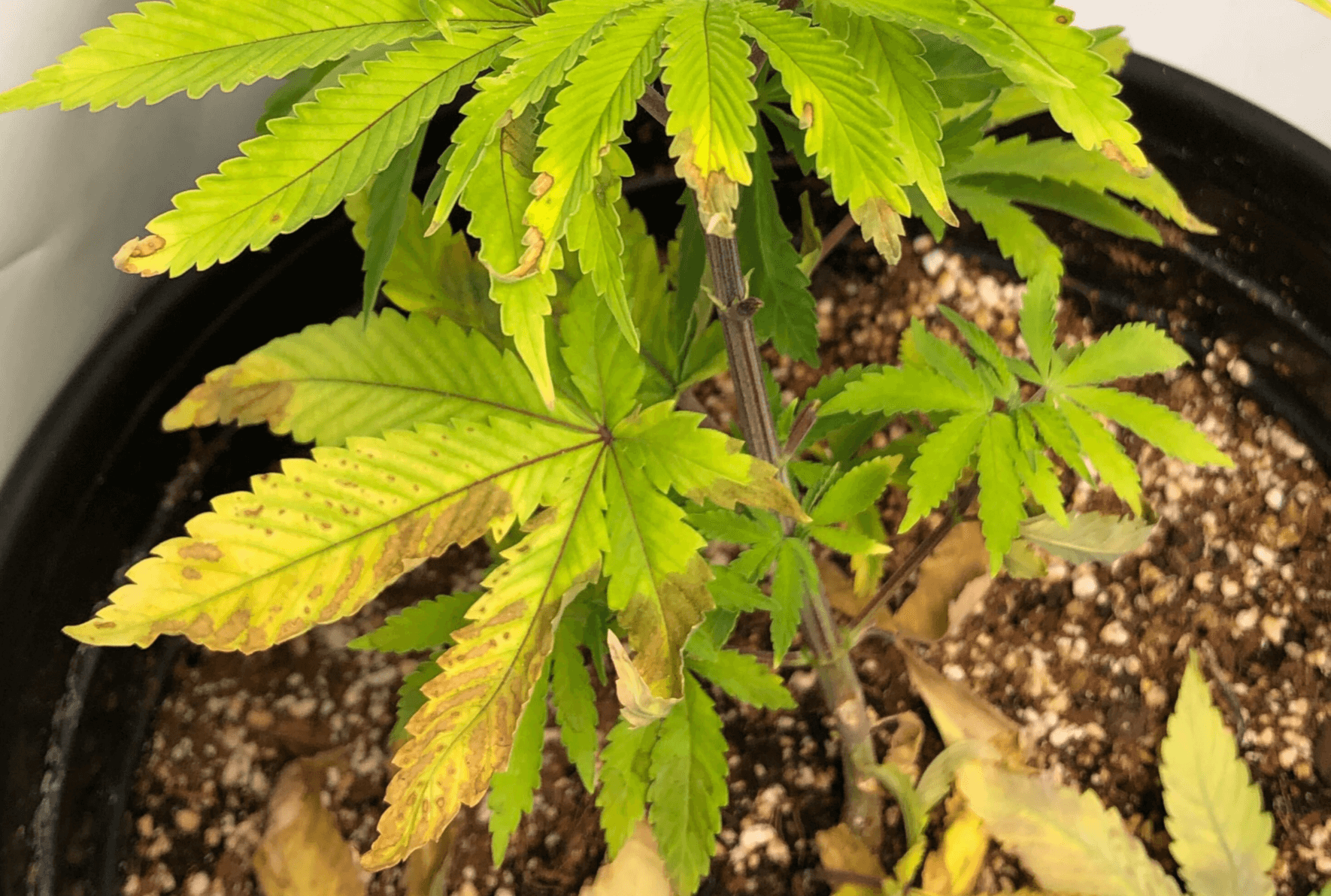 That being said on marijuana yellow leaves can be indicative of a couple of problems. However, cannabis with yellowing leaves can most often be a result of nitrogen deficiency.

Some leaves turning yellow during flowering can be a good sign as you switch over to a nutrient mix that focuses on blooming. You really shouldn’t be too concerned with nitrogen deficiency during flowering in the late stages of bloom, as you want to flush the cannabis plant of this nutrient before harvest anyway. 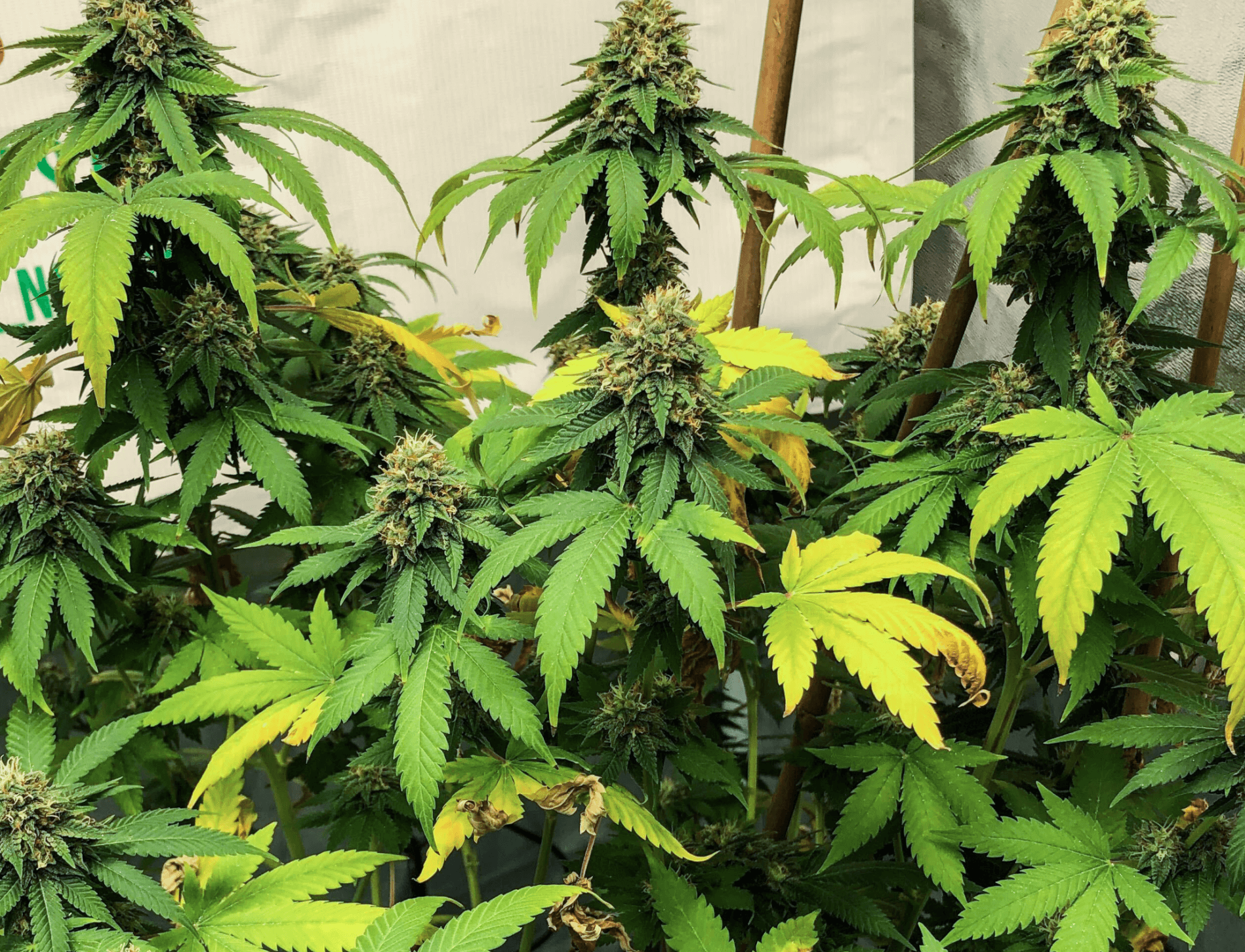 While potassium deficiency in weed is far more common in this stage, the introduction of excess nitrogen may negatively impact your buds’ taste once harvested.

How do you identify cannabis nitrogen deficiency?

While there may be some variability in these symptoms’ probable causes, you should look out for the following two indicators. Here are some signs to look out for during your daily crop care routine to help you spot potential nitrogen deficiency in weed plants.

The earliest signs will be the oldest leaves turning yellow, first between veins and then spreading out to the margins and the tips. This blight usually shows itself on the larger main leaves before it begins working its way up to newer growth. If left unchecked, you’ll notice these leaves curl, wilt, and eventually fall from the cannabis plant. 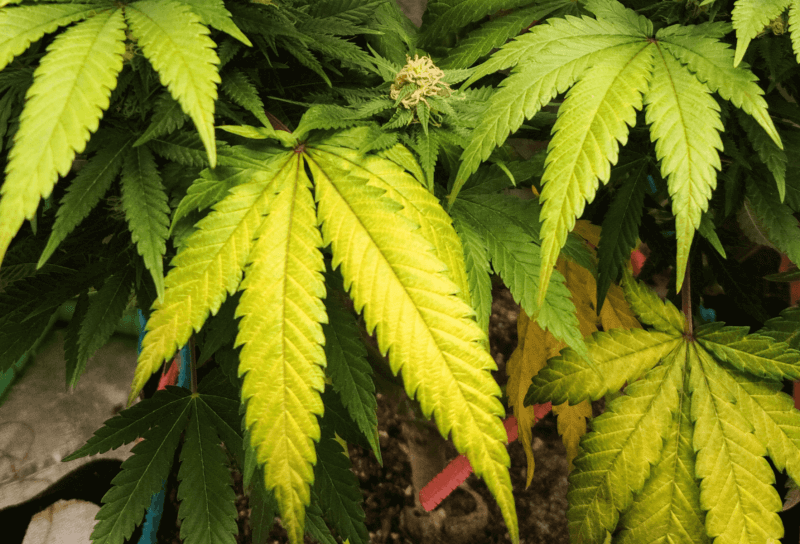 A marijuana leaf turning yellow could be a very early sign of nitrogen deficiency. You may see cannabis leaves yellowing before they turn brown.

While a change of season or equipment may be to blame in some cases, if your marijuana plant is in veg and hasn’t shown any new growth in a week or more, it’s time to investigate. Prior experience with a specific strain will also be to your advantage.

A journal of your previous crops and harvests will help you manage your expectations regarding growth periods and harvest sizes.

How to solve nitrogen deficiency

Once you’ve established that your cannabis plant may have a nitrogen deficiency, there are some practical steps to confirm your diagnosis and then remedy the problem accordingly.

If you’re serious about the health of your cannabis plants, you should invest in a soil test kit or probe-style pH meter. Many cases of cannabis nitrogen deficiency can be chalked up to incorrect soil chemistry, so make sure to test often.

Luckily, nitrogen deficiency marijuana is treatable with nearly any weed growth-promoting fertilizer variant. Make sure to follow the manufacturer’s guidelines not to overdo it, though.

You may think that adding the maximum amount of nutrients now and simply flushing them later is the best course of action. However, you may find that incremental changes produce the best results.

Adding nitrogen should only be your primary concern if your cannabis plant is still in veg or heading into early flowering. This is because you’ll want much lower nitrogen levels during the late bloom period and before you begin harvesting.

Cannabis plants prefer a soil pH level of between 5.5 and 6.5 to be happy and absorb nutrients at their maximum potential. More often than not, growers find that their weed plants show signs of deficiency while having nutrients in abundance due to incorrect pH.

This issue with uptake is known as a nutrient lockout caused by the incorrect pH levels inhibiting the plant from absorbing what may be readily available in the soil. If your weed plant’s leaves are turning yellow, do a test before reaching for more nutes.

If you find that your soil chemistry falls outside of the specified range, take steps to adjust it. After, wait a day or two before you start adding nutrients. As with any form of troubleshooting, you’ll find it easier to pinpoint a cause if you don’t change too much at once.

It’s always a good idea to remove lower leaves from your weed plant so that it can focus on new growth at nodes that’ll hopefully produce buds. You can also trim the yellowing cannabis leaves in half to further free up nutrients. Doing this will also reduce the nutrient requirements of your plant until it has fully recovered.

Too much of a good thing could indeed be very bad. Excess nitrogen for cannabis will lead to a weed plant with a vast overgrowth of stems and leaves. The lower leaves will start turning an intense green that’ll advance up the plant.

Branches and foliage will begin to droop as the water transport system weakens. Then your harvest will have a very green, almost grassy taste. While nitrogen toxicity isn’t widespread, it tends to happen when growers add too much of it during the cannabis flowering stage, so beware of this.

If you see lush green leaves on the lower parts of the weed plant that feel stiff and have a purple tint, you may want to consider that your cannabis plant may be experiencing a phosphorus deficiency.

Regularly test both your soil pH and the water runoff, and as soon as you see marijuana leaves turning yellow. By spending time with your cannabis plants and observing them daily, you’ll be able to prevent many of the common mishaps new growers experience. 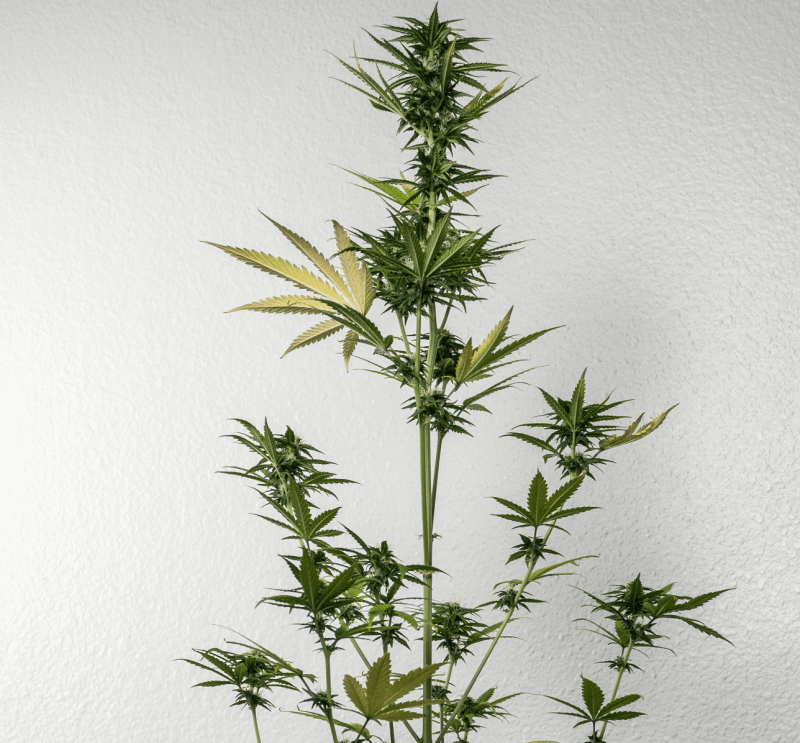 Overall, bear in mind that whether grown for seed or by propagation. Cannabis tends to be a very tolerant plant that reacts to positive changes quickly.

Start with good soil and you’re providing proper lighting and ample nutrients. This way, any minor mistakes you make along the way will have minimal impact on your final yield. Naturally, you must treat any problems quickly.

10 June, 2021 Growing Issues
Iron deficiency in cannabis is pretty common, with iron being an essential micronutrient, ...

How to Stop Moldy Weed

8 June, 2021 Fungi & Other Diseases
Moldy weed can occur as a result of a number of different reasons, no matter the re...

3 June, 2021 Growing Issues
Marijuana seedlings stretching and falling over can be a common occurrence in the early st...

Solving the problem of potassium deficiency on weed plants

2 June, 2021 Nutrient Problems
Potassium deficiency in weed can manifest in a number of ways, in this article, we ...

11 May, 2021 Nutrient Problems
A magnesium deficiency in a weed plant can quickly turn lethal. Cannabis, like all living... 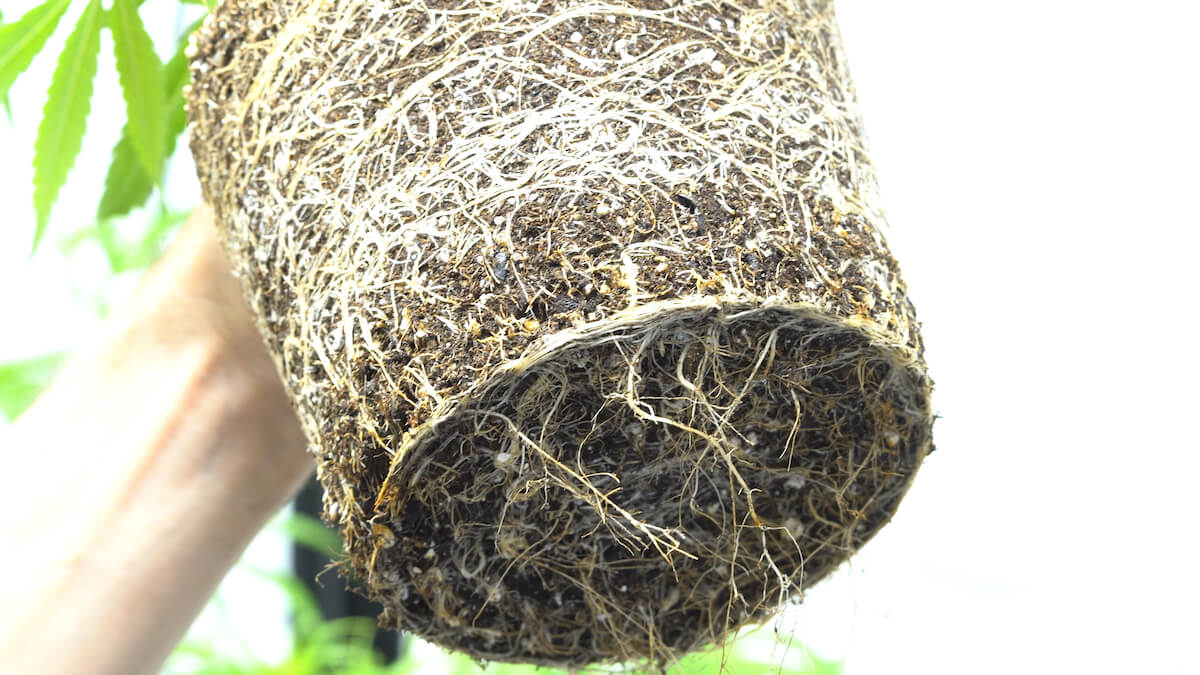 16 April, 2021 Fungi & Other Diseases
Root rot on cannabis can cause some serious issues, in this article we will look at diagno...