Magnesium deficiency in weed is one of the most common nutrient deficiencies.

Any problem that’s harmful to your cannabis crop is a severe concern. Magnesium deficiency in weed is often more weighty than growers realize. The consequences can be dire, from minor yellowing of leaves to lower bud production and possible plant death.

Join us as we investigate magnesium deficiency in cannabis, its symptoms, and how to solve it. Let’s get on it.

What is magnesium deficiency?

After the three primary nutrients, phosphorus, potassium, and nitrogen, weed plants require a host of micronutrients. Magnesium (Mg) is among the chief of these elements, and an Mg deficiency in cannabis can spread quickly.

Typically, a mag deficiency means that the plant isn’t getting enough magnesium from the soil and water. Since this mineral is one of the vital elements required for photosynthesis, the result can be catastrophic.

The causes of magnesium deficiency in weed

There are multiple causes for magnesium deficiency in cannabis. Some soil alternatives, like coco peat, have trouble absorbing minerals like calcium and magnesium. Since their capacity to soak up these trace elements is lacking, micronutrients quickly flush through the system.

If the substrate retains little enough of the substances mentioned, it can quickly lead to a cannabis magnesium deficiency. Cannabis manganese deficiency and cannabis iron deficiency are also common issues in these types of systems.

Many other situations can lead to Mag deficiency in weed. When growing marijuana outdoors, these include a natural absence of Mg in the native soil.

Some areas around the globe have abundant magnesium due to naturally occurring rock formations. The mineral’s presence reflects in the amount of Mg present in both the soil and the groundwater.

In other parts of the world, the groundwater has high concentrations of elements like calcium and fluoride but almost no magnesium. When you cultivate your cannabis crop in such a place, it can quickly lead to marijuana with magnesium deficiency.

Beware of trying to prevent a deficiency by dosing your weed plants if they show no sign of lacking nutes. If your groundwater or soil contains abundant Mag, adding more can lead to magnesium toxicity in your cannabis.

If you’re growing your weed in a prepared substrate and using reverse osmosis (RO) water, you may be growing marijuana with a magnesium deficiency. The filter on a RO system is fine enough to remove even trace nutrients and minerals. As a result, your cannabis plants may be getting little to no Mg.

calcium deficiency in weed too.

Below we’ll study some of the significant magnesium deficiency symptoms in cannabis. We’ll also mention a few less common but still vital signs of lack.

Because mag is a vital component for photosynthesis, the plant draws Mg from older leaves to send it to the newer ones. Magnesium deficiency in marijuana often manifests as yellowing lower leaves since the bottom blades formed first. 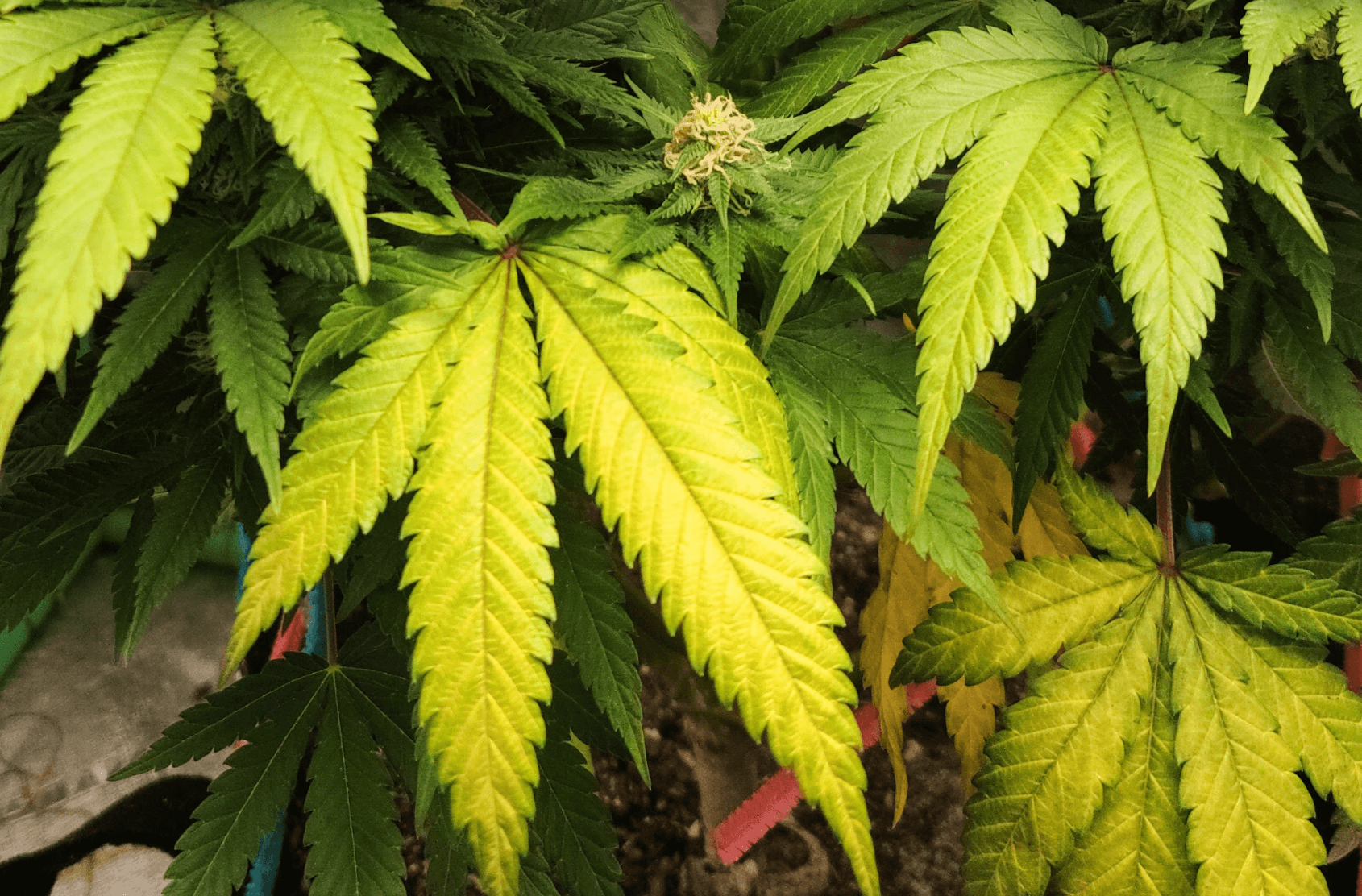 The yellowing process follows a strictly defined protocol. First, the veins of the leaves start to turn yellow, then the areas between. The surface may also present with brown spots that look like small burns.

At the end of the yellowing process, the leaves’ tips and edges will start to turn brown and burn. The rest of the foliage may turn dry and crackly.

It’s worth noting that the first symptom of a mag deficiency can be intensely green leaves rather than yellowing. When the cannabis plant notices the deficit, it starts pumping as much Mg as possible to the blades. The resulting abundance leads to intensely healthy-looking green leaves. They may be glossier or darker than usual.

Red stems are a less common symptom of magnesium deficiency in marijuana. It’s not unusual to see this discoloration in deficient weed plants. 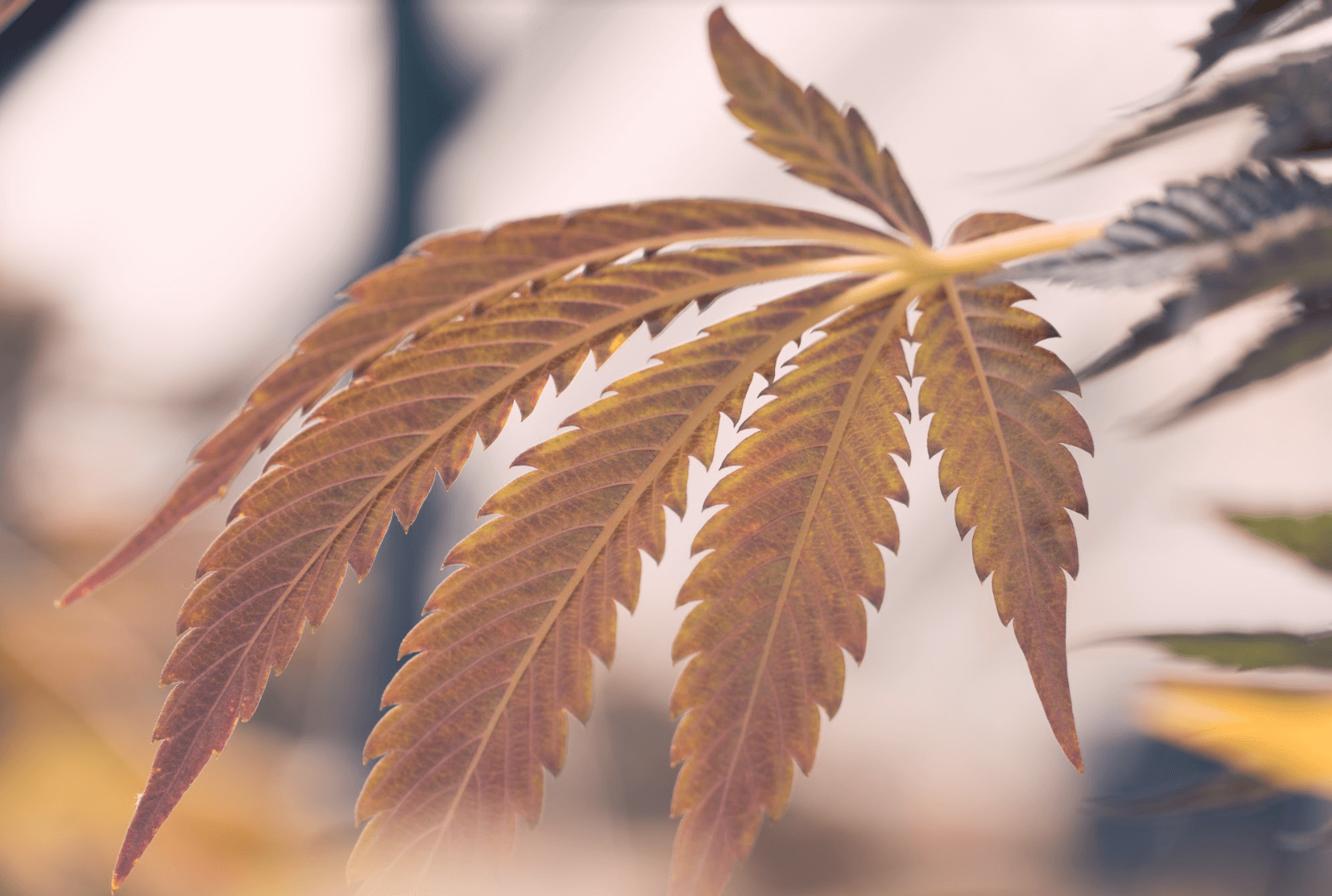 When you don’t see red coloration in your cannabis crops, but you see other symptoms, that doesn’t mean that Mg isn’t the issue.

How to tell if you have cal-mag or mag deficiency?

Calcium (Ca) and magnesium have certainties that impact each other directly. In specific concentrations, excessive calcium can prevent the cannabis plant from absorbing Mg and vice versa.

When not enough Ca is available, the weed cannot use the Mg in the soil and water. As a result, calcium shortages lead to a magnesium deficiency in marijuana.

The link between the two elements has led to a categorization known as cal-mag. A cal-mag deficiency in weed has similar symptoms to a lack of Mg, but treating it by adding magnesium will lead to a nutrient block.

You need to know how to distinguish a cal-mag issue from a fundamental magnesium deficiency in weed plants.

Shortages of calcium, magnesium, and iron often go hand-in-hand, so they share some primary symptoms. It can be challenging to spot a cal-mag deficiency for what it is without assuming it’s another kind of lack.

As with a mag deficiency in weed, you’ll see some chlorosis (leaf yellowing) and leaf necrosis (brown spots on the foliage). Another shared symptom is browning and burning around the leaf edges.

A calcium and magnesium shortage has additional symptoms. One of those is leaf clawing (when the leaves curl downwards at their tips). You may also observe dark green areas around affected foliage.

New leaves may be deformed or small, old ones sometimes crinkle, and the problem might stunt the marijuana plant’s growth.

Differentiating between magnesium deficiency and other nutrient deficiencies

As with cal-mag, a magnesium deficiency in weed often resembles other nutrient issues. With some experience, you’ll learn to differentiate between different shortages.

We’ve already looked at cal-mag shortages, so we’ll briefly investigate a few other commonly-seen types. An iron deficiency often presents as yellowing leaves. With an Mg shortage, the blades turn yellow from the bottom up, while an iron shortage does the reverse.

Nitrogen deficiencies in cannabis are common because it’s one of the most used substances in marijuana plants. If your weed plant lacks this macronutrient, the foliage from the middle downward will start yellowing rapidly.

As the cannabis plant sends all the available nitrogen to the growing crown, it promptly removes all the nute from the lower reaches. While a mag deficiency in cannabis presents as yellowing of the weed plant’s lowest leaves, a nitrogen shortage manifests as the bottom half of the crop yellowing.

A shortage of phosphorus is another potential complication. Cannabis plants suffering from this ailment will appear frail and start losing color on the outside edges of foliage. The bases of the marijuana leaves may turn blue or purple, and leaf clawing is common.

A marijuana potassium deficiency is the last of the big three. If your weed suffers from this, it’ll go through a tremendous growth spurt (don’t get stoked). After the burst, the foliage will look incredibly healthy for a few days before the bottom leaves turn brown and start falling off. In this case, the symptoms aren’t similar to a lack of Mg, making it easy to identify.

The listed cannabis deficiencies are only a few of many, and there’s a host of other micronutrients that can cause problems. If your marijuana plant starts yellowing from the bottom up, the stems turn red, and the foliage develops brown spots (without leaf clawing), Mg is probably the culprit.

How to fix magnesium deficiency in cannabis

Now that you know how to spot this problem, you’re probably wondering how to fix magnesium deficiency in plants. Fortunately, repairing this kind of weed deficiency is almost as easy as unintentionally causing it.

Flush your plant and upgrade your nutrients

The first step to solving a magnesium deficiency in weed is to flush the soil. 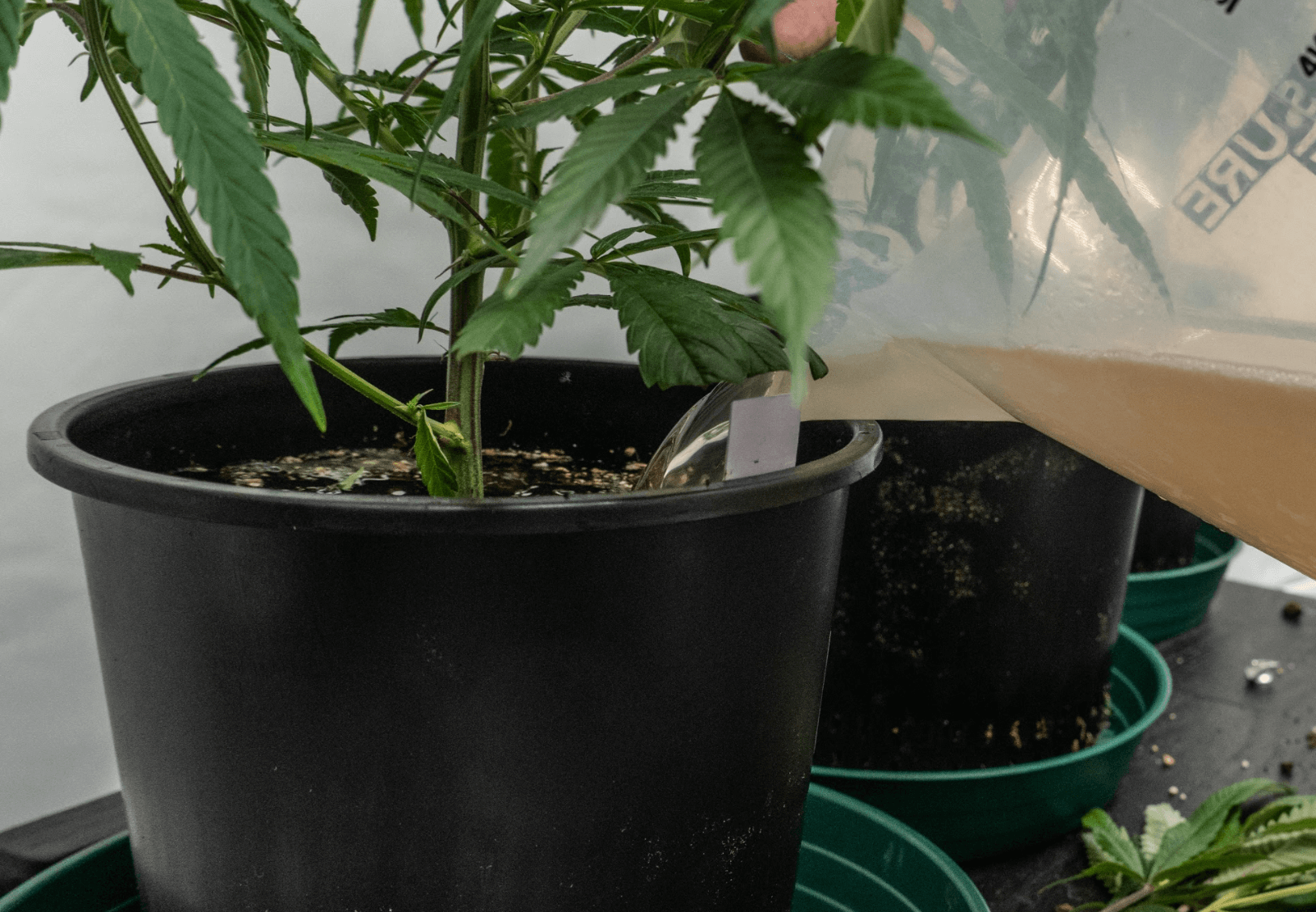 Flush your plant and add supplements

The second way to repair a magnesium deficiency in weed is as follows:

You can avoid a magnesium deficiency in weed

In this article, we’ve looked at everything from why Mg is vital to how to fix magnesium deficiency in cannabis. With all the information at your disposal, you can solve any Mg issues that arise.

Don’t forget, your weed plant’s life starts in the seed, where it gets many of the nutrients to kickstart its growth. If your cannabis seeds don’t come from a reputable provider, the marijuana seedlings can suffer from magnesium shortage before you ever get them. 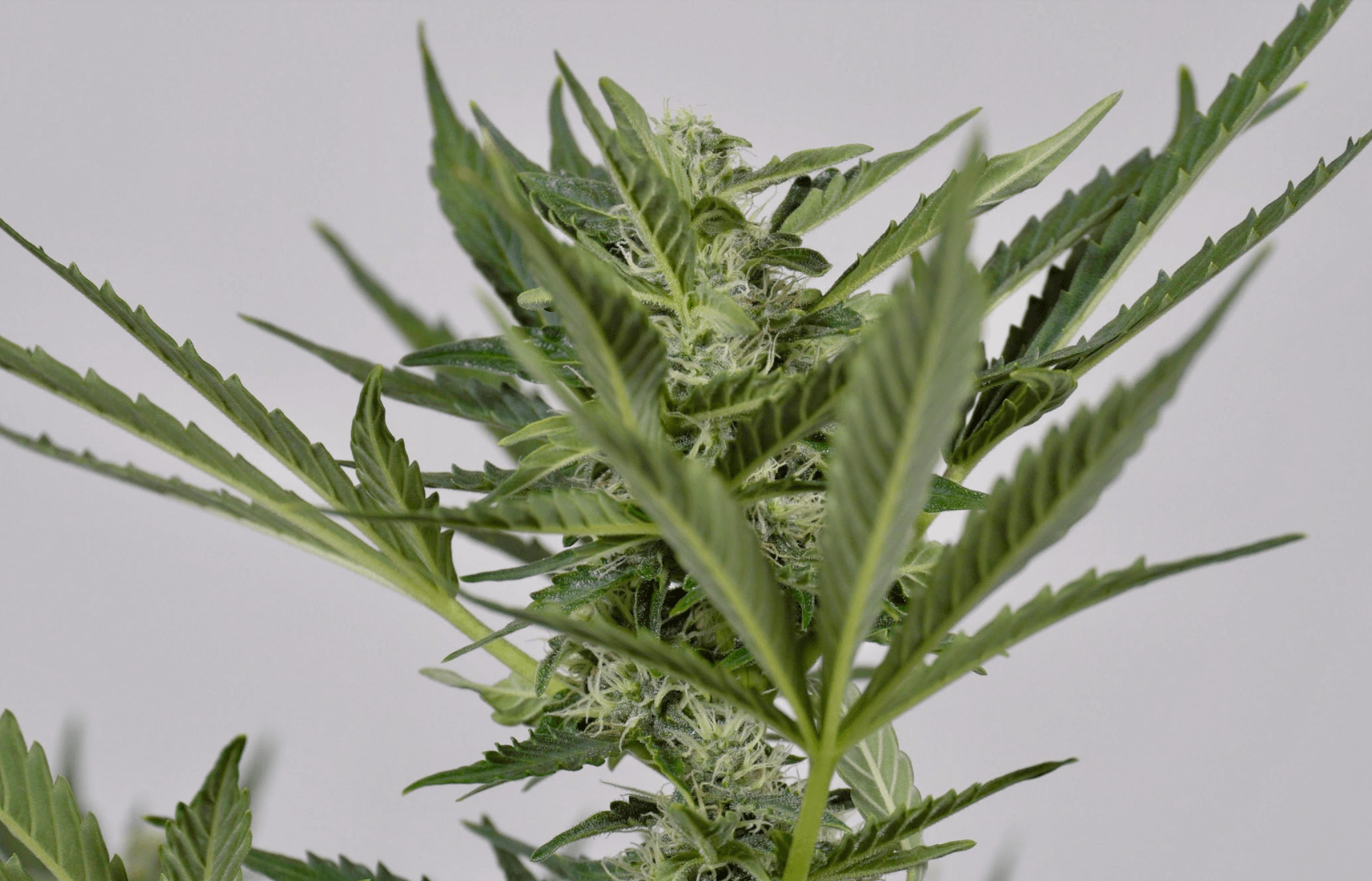 For reputable weed seeds that you know come from healthy, balanced cannabis plants, check out our store. We stock some of the most-loved varieties and have a full range of feminized cannabis seeds. From classics to the new kids on the block, we have it all. 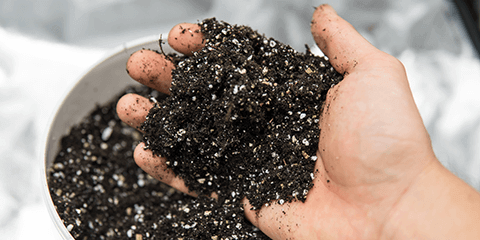 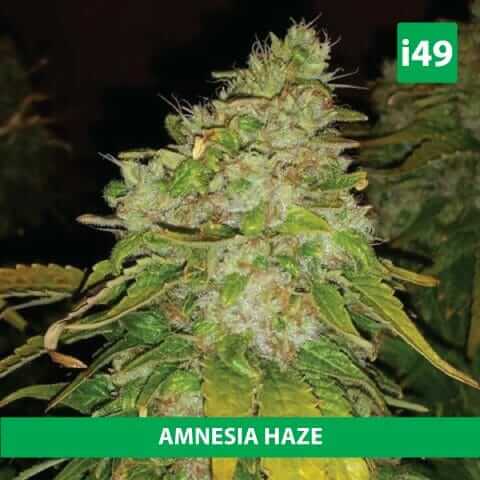 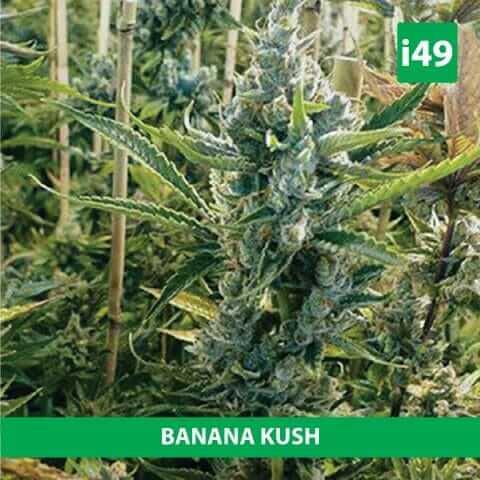 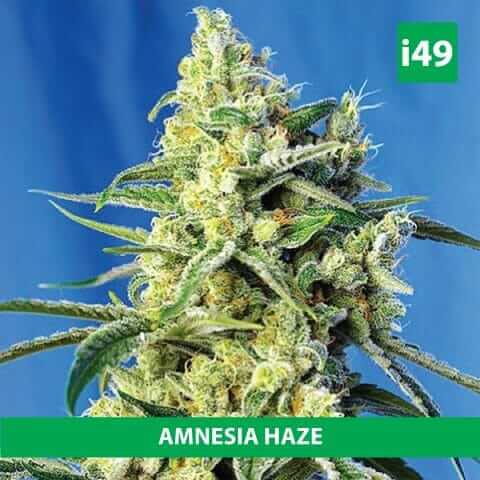 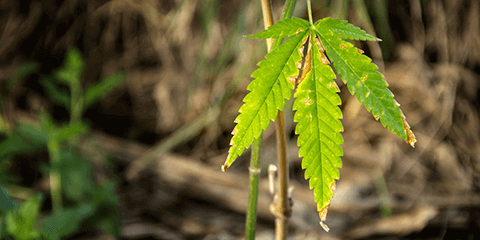 How to Stop Moldy Weed

June 8, 2021 | Fungi & Other Diseases
How to Prevent Moldy Weed   Moldy weed can occur as a result of a number of different reasons, no matter the reason, mold on weed is ne...
Read more

June 3, 2021 | Seedling Stage
How to Stop your Marijuana Seedlings from Stretching and Falling Over Marijuana seedlings stretching and falling over can be a common occurr...
Read more