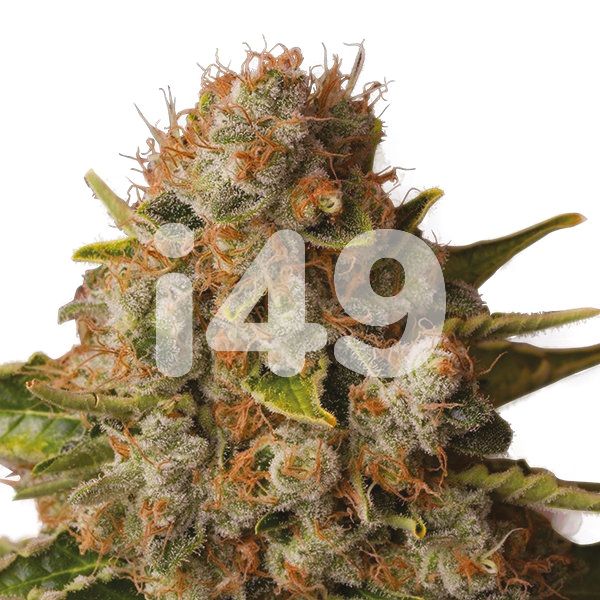 White Widow Marijuana Strains
Get White Widow seeds for sale from I49 USA. Call +1 (240) 618-2744 and speak to a weed seed specialist and choose from autoflowering, feminized and regular marijuana seeds. Then make a payment via our convenient options. Once your cannabis seed order is confirmed, we will ship the package out via post and you are almost ready to germinate. Upon delivery, inspect the contents of the box and make sure its all there and take a picture. Then follow our germination guidelines to ensure maximum success.

White widow is one of the most famous strains in the world! It is a balanced hybrid that combines the uplifting effects of sativa cannabis seeds with the powerful relaxation of indica weed seeds. This magnificent strain is the lovechild of a brilliant Brazilian sativa and a smooth South Indian indica. It got its start in the chill cannabis culture of the Netherlands back in the 1990’s. Virtually every Dutch coffee shop menu has boasted this dope strain and if the Dutch know about anything, it’s potent, premium ganja!

White widow has long been beloved for its beautiful appearance with alabaster crystal layers that remind you of a pristine snow-capped mountain. It has much more to offer than beauty alone though. It is a seriously potent strain that is capable of rocking even the most veteran smoker and making it feel like your first puff-puff-pass all over again.

The magnificent aesthetics of this plant coupled with its potency has not been unnoticed by those that spend their life around marijuana seeds. It won the 1995 High Times Cannabis Cup’s Bio Category and then came a close second in 2008 for the Copa Cannabica Del Plata. These are just a few highlights from its trophy case and has such international acclaim that it was featured on the television show Weeds and in various rap songs, including Birdman’s Smoke Out.

These little beauties are beloved by veteran cultivators because they are easy to grow and this makes them a great place for newbies to start as well. They are a 60% indica, 40% sativa hybrid that offers benefits for recreational and medicinal users alike. Its 19% THC content is evident when looking at the thick, sticky, resinous buds that are harvested from this plant. They are a forewarning to smokers that a massive cerebral buzz is around the corner after lighting it up! Their sugary trichomes are bound to impress even the most subdued of your friends.

The White Widow strain seeds are a joy to grow for a wide range of experience levels. Beginner and master cultivators alike enjoy how easy it is to produce a robust yield with simple and basic techniques. This indica dominant hybrid is unlike most indica plants in that it can become a monster of a plant, reaching a height of up to 8 feet! You will be in awe of the bushy, dark green foliage that gives off a deep plum when the temperature cools. The branches are thick and sturdy enough to handle the large and heavy colas that are produced.

This towering specimen prefers warm climates but can survive cooler temperatures as well. Ensure that the buds are protected from mold, mildew, and pests and you will be in the clear. Make sure to have adequate spacing between other plants and have a good ventilation system in place. Consider using the Sea of Green method, maturing the plants early to limit their size and produce buds faster, or the Screen of Green, where plants utilize a screen to have plants grow horizontally. These are both good techniques to use when space is limited.

After about 8-9 weeks of flowering you will be ready to harvest these sticky resinous buds with beautifully sugared trichomes. When growing outside under natural conditions, you will want to ensure that you harvest no later than mid-October.

You’ll love the ease of growing and the astounding effects of this all-star strain. Most growers are excited to add this to their indoor growing arsenal. While this towering behemoth can grow huge under natural conditions, it can adapt to grow in a smaller indoor space as well. By shortening the vegetative phase and opting for a smaller pot will help to limit its towering height and allow it to fit into a small space. When training it to be smaller to fit your indoor space you will want to utilize the Sea of Green or Screen of Green methods to ensure that you are not sacrificing its full yield potential due to limited space. The Sea of Green technique will mature plants early, often after 2 weeks, in order to speed up the production of buds and take up less space. This will cut down on time between harvests which means a steadier supply of fresh ganja! Using the Screen of Green method, where you would utilize a screen over top of your plant to hold back the tops of your growing canopy and allow more areas to receive light, one plant can quickly fill a 3x3 growing tent and be ready to bud before you know it. Under optimal conditions, after the 8-9 week flowering time you will be ready to harvest 2.6 ounces per square foot of gluey, aromatic buds.

Location, location, location is the common mantra for outdoor growing for a reason. You will want to ensure that you are off the beaten path and away from nosey neighbors. This plant is not one that you will want to try and stifle the naturally large footprint it has. Find a great location that offers lots of radiant sun to allow the plant to flourish. It loves a Mediterranean climate but can also grow in cooler places. Make sure to germinate the White Widow strain seeds after the last frost and harvest them no later than Mid-October.

Do you currently use synthetic drugs to help treat different ailments? The amazing white widow strain has been used as an herbal alternative to synthetic drugs. Many users report positive results when it is used to help deal with various ailments and to help restore their quality of life.

This magnificent strain has a long-lasting high that would be perfect to help those that suffer from symptoms of stress, insomnia, depression, anxiety, arthritis, fibromyalgia, and chronic pain. This strain also has a strong appetite stimulant so it can be effective when dealing with a variety of eating disorders.

While this strain can leave you with irritating cottonmouth, and bloodshot eyes, these are not uncommon for most strains and easily fixed by carrying a water bottle and some eye drops with you.

It’s high THC content (19%) packs a powerful punch that provides a long-lasting mental buzz and then provides a sense of calm without gluing you to the couch. This strain is known for that classic good time high that inspires creativity with bursts of energy and euphoria. The buzz is long lasting and powerful but not overwhelming. Its hybrid nature compliments the sativa and indica effects well and provides a balanced high, suitable for most users.

White Widow is perfect for daytime smokers who need something that won’t cause them to lose all motivation and simply chill out, while also being that perfect nighttime smoke that can melt your stress away and help you to feel happy but not comatose.

With the balancing effects of sativa and indica, this strain is perfect for get togethers with friends and can allow everyone to be social and stimulate conversations while helping everyone to feel mellow and calm while doing it.

Those who prefer sweet, fruity aromas might need an adjustment period. This has a pungent and musty aroma with spicy earth undertones. It can be smelled from far away and will be recognizable by many veteran smokers right off the first hoot.

This has a powerful and dank flavor. You will experience some sweetness as though you bit into a powdered sugar funnel cake. Underneath this sugary exterior you will be reminded of a sandalwood taste filled with pine, lemon and fruity sweetness.

Luckily, I49 carries a wide variety of strains if you are unable to find any White Widow. Regardless of which strain or strain variation you end up choosing, you’ll never have to question its exceptional genetics.

Save yourself stress and anxiety and order directly from I49 to ensure superior genetics, a germination guarantee, and the confidence of knowing we always supply growers with authentic strains and no substitutions.

This world-famous strain derived its name from the crystal covered buds it produces, much like a spider’s web. It is occasionally referenced as simply Widow, but typically this strain lacks nick names.

These world-renowned cannabis seeds are an easy to grow strain that is perfect for your indoor or outdoor set-up. Come buy White Widow strain seeds online from I49 USA; they come with a germination guarantee that ensures you will experience a delicious and satisfying harvest that will be sure to impress your friends. With I49 USA you get a reputable online seed bank who values customer satisfaction and ensures that what happens on our site stays between you and us! We store all of our premium seeds under optimal conditions to ensure that freshness is assured when they arrive at your door. Contact us through our online form or speak with a live operator for some direct human connection if you prefer that route. We strive for the highest customer care and have many outstanding reviews from satisfied customers. Rest assured that when you order your seeds from us you are getting the best possible seeds at a competitive price from a seed bank who is passionate about becoming your cannabis growing partner!

Shipping Info
We ship to the USA. We offer tracked shipping from $9.99 and FREE Shipping for orders over $90. Once your order is confirmed, you will receive a tracking ID by email. Your seeds will arrive in between 10-14 days. However, it can take up to 25-30 working days in some cases.

Where can I buy the White Widow Fem strain in the USA?

i49 USA sells White Widow Fem marijuana seeds online or by calling tel +1 (240) 618-2744. The sales representatives are available from 8am to 6pm PST, Monday to Friday; and from 9am to 4pm PST, Saturday and Sunday.

How can I buy the White Widow Fem weed seeds online?

A simple approach is to find an online weed seed bank that sells White Widow Fem and place an order through the website. Usually, you can pay with Bitcoin, Cash, Personal check, or Money Order.

How long does it take to receive my White Widow Fem weed seeds?

What is White Widow Fem good for?

What are the Medical benefits of White Widow Fem?