Arkansas is located in the southeast part of the United States. It’s the only state in the country that actively mines diamonds. However, you might be asking, “is weed legal in Arkansas?” as that’s a little more affordable. 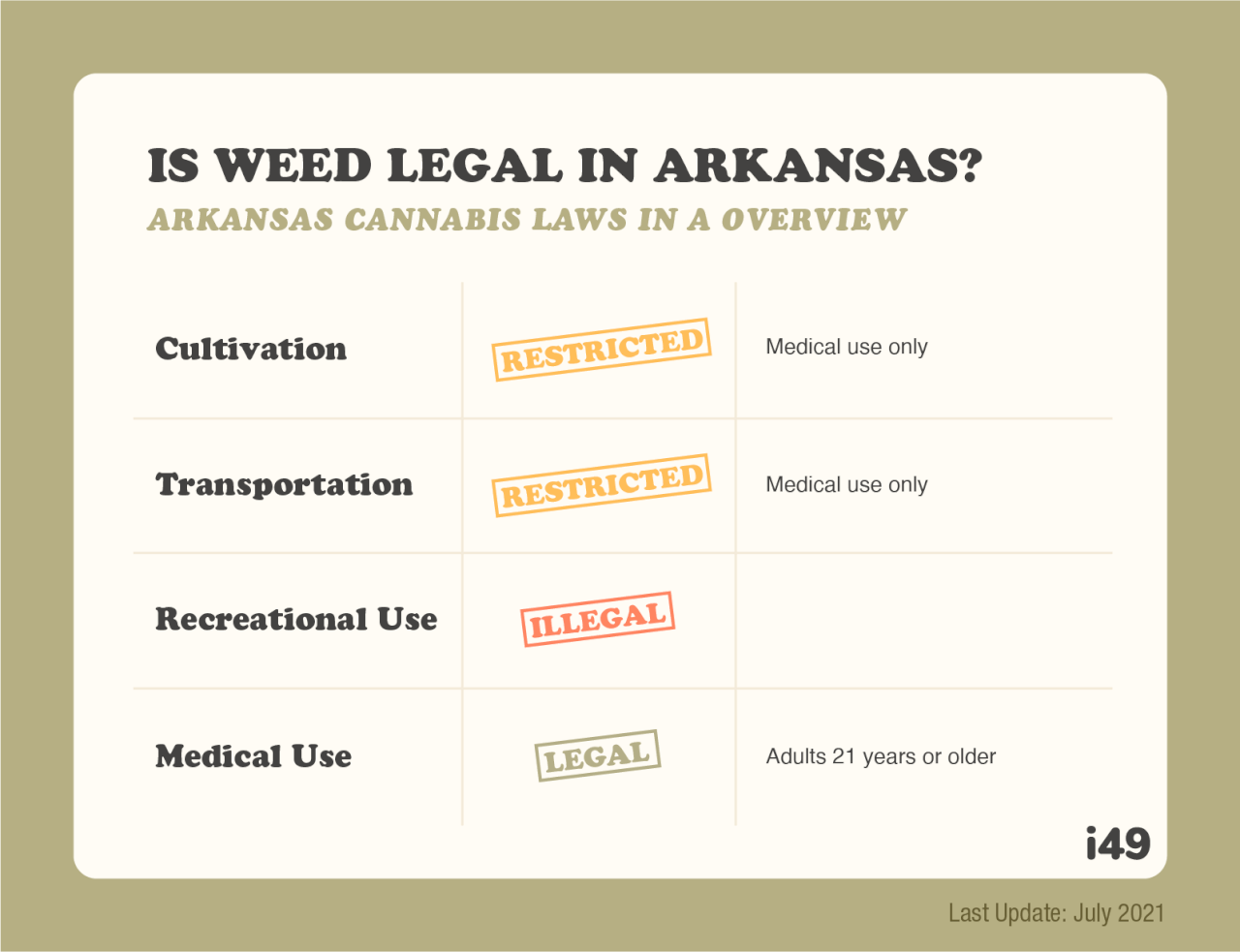 Arkansas is pushing to make recreational weed legal but hasn’t succeeded yet. So you can’t yet enjoy legal marijuana in Arkansas. Let’s take a closer look at the Arkansas marijuana laws for both personal and medicinal use.

At the time this article is being written, under Arkansas marijuana laws, recreational possession and use are illegal, while medical cannabis is legal.

Is recreational weed legal in Arkansas?

Arkansas has stricter laws than other states regarding cannabis. It hasn’t been decriminalized yet, not even for a small amount. If you’re caught with the possession of 4 ounces or less, and it’s your first offense, officials will charge you with a misdemeanor, a year or less incarcerated, and a $2,500 fine.

You will receive a felony charge (up to 6 years in prison and a $10,000 fine) for subsequent offenses including less than 4 ounces according to Arkansas marijuana laws. These are quite high consequences for possession of cannabis, but that’s how the law goes.

With the harsh terms for recreational cannabis, patients may ask, is weed legal in Arkansas for medicinal use? Yes! To hold an Arkansas medicinal cannabis card, you must register with the ADH and pay a $50 fee. To enjoy Arkansas legal medical marijuana, you also must be diagnosed by a doctor with one of the following conditions.

What is medical marijuana legal in Arkansas for?

Once approved, the Arkansas medical marijuana laws state that patients are allowed to purchase no more than 2.5 ounces of weed every 14 days. You must purchase it at a state-licensed dispensary, and it has to be non-smokable.

Legal Arkansas marijuana dispensaries can’t have cannabis drinks or foods with more than 10mg of THC. Also, no edibles can be modeled as normal kid-friendly food like brownies, cookies, or candies.

Arkansas cannabis laws in the future

The residents of Arkansas aren’t just sitting back and letting these strict laws stick around. The National Organization for the Reform of Marijuana Laws (NORML) Arkansas chapter pushed to get a vote to make marijuana legal in Arkansas on the 2020 presidential ballot.

The COVID-19 pandemic made it difficult for the organization to get enough signatures, meaning residents couldn’t vote on this in 2020. NORML is now focused on getting it on the 2022 ballots in the hopes of having legal weed in Arkansas soon.

The proposal for legalization is to allow people 21 years or older to have up to 4 ounces of Arkansas legal weed flower products, edibles containing 200mg of THC or less, or 2 ounces of concentrated weed. It would also allow growing up to six seedlings and six flowering plants, which is currently illegal.

There’s also talk among legislators about a decriminalization bill to pass first. This would take away the punishment of jail time for those possessing less than 4 ounces.

We’ll just have to wait to see if officials will take action and if the people can vote on Arkansas marijuana laws in 2022.

Is buying cannabis legal in Arkansas?

For recreational use, buying is illegal, and for medicinal use, patients are only allowed to purchase their weed supply at a licensed state-approved dispensary. Under Arkansas medical marijuana laws, it can’t be a smokable form of cannabis.

Can I grow my own cannabis in Arkansas?

You might be thinking, well, is weed legal in Arkansas to grow? The answer is no. For both recreational and medical marijuana, it’s strictly not permitted.

Officials will charge those caught cultivating similar to possession. They’ll weigh the total product you have, including the marijuana plant and cannabis seeds, to determine your penalty for having non-legal weed in Arkansas.

Depending on the number of marijuana seeds and plants you have, officials can charge you with the intent to deliver. These penalties are much harsher. Fourteen grams to 4 ounces is considered a felony, you’ll get up to 6 years in jail, and it’s a $10,000 fine.

Remember, one marijuana plant can yield more than you think. For example, the 24K Gold Fem seeds can harvest 15 to 19 ounces per square meter of the cannabis plant.

Based on Arkansas marijuana laws, just one weed crop will put you in the felony category. Feminized seeds tend to have a bigger yield than regular or autoflower seeds.

Is cannabis consumption legal in Arkansas?

Recreational consumption of weed is illegal anywhere within the state. Perhaps you’re asking yourself, where is weed legal in Arkansas for medical marijuana patients to consume?

Patients can’t drive under the influence of marijuana under any circumstances.

When will marijuana be legal in Arkansas?

We can’t make any promises regarding changes in the Arkansas marijuana laws. However, there’s a lot of chatter about a legalization vote in 2022, so you may be able to enjoy Arkansas legal marijuana soon. Until then, these are the current rules, and residents and those visiting must follow them.

With the hope of changes next year, it’s the perfect time to read up on all of the great marijuana strains, how to grow them, and the best techniques to use at i49 Genetics. You’ll be fully informed when the time comes to buy cannabis seeds, grow your weed plants, and smoke Arkansas legal weed with confidence.